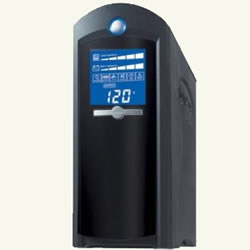 The purpose of an uninterruptible power supply (UPS) is to provide instantaneous replacement power to specific devices, such as computers and their associated peripherals, in the event of the loss of electricity normally provided from an outside source such as a power generation utility.

Uninterruptible power supplies have a battery or batteries that are continuously under charge. The batteries, for all intent purposes, instantaneously deliver electrical power to those devices plugged into them. In most cases, uninterruptible power supplies are used to supply short term electrical power. When powering computers the intent, in most cases, is to provide enough power to allow the computers to be shutdown properly. 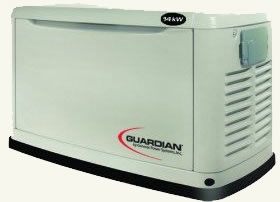 They can however be installed to supply longer term power. The length of time that they will supply electricity is primarily a function of the size of the batteries installed in the UPS versus the power being drawn from the equipment plugged into it The UPS is rated in Watts and or VA (Volt, Amps).

A standby generator (Figure 2) with an Automatic Transfer Switch supplies power, however there is a time lag between the loss of utility power and the availability of the power coming from the standby generator.

The standby generator, requires a time period to ramp up in order to provide power, hence the power from the standby generator even if it started immediately would not be available instantaneously. Electrical devices, such as computers would have lost electrical power, long enough for them to require restarting.

Standby generators will, as a general statement, provide power for a much longer period of time than an uninterruptible power supply. They do not deliver power through charged batteries, but via an engine turning a generator. The limitation to the length of time that they will deliver their rated power is dependent on how much fuel the engine has available to continue to operate.

With this configuration, under normal conditions utility power will keep the batteries in the uninterruptible power supply full charged and supply power to the computer.

In the event of a utility power failure, the UPS would supply electrical power to the computer until the standby generator is up to speed and can take over the on going supply of electrical power, while continuing to charge the batteries in the UPS.