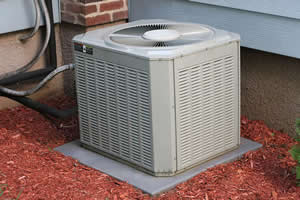 A forced air furnace generally has floor vents that provide entry of the hot air into the room. As well, there will be at least one cold air return and depending on the size of the home there may be a number of cold air returns.

The air flow from a forced air furnace works because the hot air enters the room through a floor vent or register that is generally placed close to the exterior wall below windows, and exits the room through a cold air return which is usually mounted on an inside wall just above the baseboard.

However, this does not work well for central air conditioning.

The perfect situation for an air conditioner is the reverse. The cold air would enter the room with ceiling mounted vents located near the exterior wall, above a window and be collected by a hot air return located on an internal wall just below the top of the ceiling.

This works because the cold air falls from the ceiling vent and the return air is picking up the hot air that is rising.

Although it is usually not economic to add ceiling vents to handle the air conditioning, adding return air grills near the ceiling is usually quite an easy and inexpensive project.

By adding the returns near the ceiling you collect the hot air that is in the room, and send it to the blower in the forced air furnace where it is cooled by the air conditioning coils.

To implement the addition of ceiling returns for your central air conditioning it is necessary to change the grills on the cold air returns to types that have louvers in the back that will close off the grill, as shown in Figure 2. 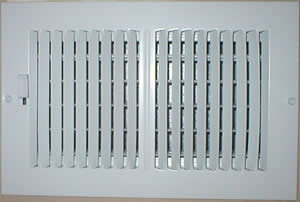 Most returns are mounted in the wall and use the channel created between two studs and the drywall as the return duct. No metal duct work is actually used. As this channel generally runs from the floor to the ceiling (less the 2 x 4 plates that are at the very top of the stud wall), it is only necessary to mark the location of the channel and cut an opening at the top of the wall, below the plates, the size of the grill, to allow the channel to pick-up air that is at the ceiling.

Note: In a few cases there may be a 2 X 4 installed horizontally between the two studs approximately half way up the wall. Make sure that the channel between the two 2 X 4 studs is open. If a horizontal 2 X 4 has been installed it will have to be removed to allow air to flow from the upper grill back to the furnace blower.