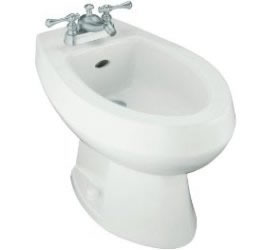 Bidets install in the same manner as a toilet, although many require hot water and a smaller drain pipe is utilized.

Despite appearing similar to a toilet, it would be more accurate to compare it to the washbasin or bathtub. In fact, the bidet makes an excellent baby bath. Anyone who has mobility problems and finds it difficult to get into a bathtub, or is afraid of slipping in the shower, may find a bidet an excellent solution for maintaining personal hygiene.

Users who are unfamiliar with bidets often confuse a bidet with a urinal, toilet, or even a drinking fountain. The user should use the toilet before using the bidet; its purpose is to wash afterwards. It is generally understood that you should sit on a bidet facing the tap and nozzle, however that is not necessarily the case. It's just as efficient and, some say, less awkward with your back to the tap and wall.

Bidets are made in several different designs. They may have one tap which pours (usually warm) water into a china basin. The basin can be plugged and filled if necessary, or the water can be allowed to drain away. Other bidets have a nozzle which propels an arc of water up into the air. This jet of water is angled to connect directly with the genital area.

A bidet may also be a nozzle attached to an existing toilet, or a part of the toilet itself, as shown in Figure 2. 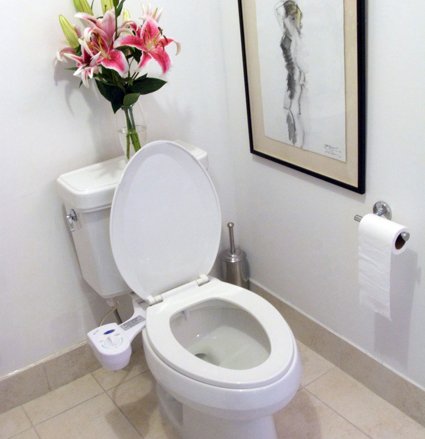 In this case, its use is restricted to cleaning the anus and genitals. Some bidets of this type have two nozzles, the shorter one, called the family nozzle, is used for washing the area around the anus, and the longer one (bidet nozzle) is designed for women to wash their vulvas. These bidets are often controlled electronically rather than with a traditional faucet, and some have an element under the seat which heats up to dry you after washing.

Although using a bidet may include touching the genitalia and the anus with the hands after using the toilet, it can be more hygienic than toilet paper. In fact, most people with bidets use both, wiping with toilet paper before washing with the bidet.

Bidets are very useful for the elderly or anyone with mobility problems and for people with hemorrhoids. Although bidets are simple in style, the assortment of bidet faucets that are available are a designers dream.

Additional information on remodeling a bathroom