Molded from porcelain, as shown in Figure 1, toilets are the basic essential for a bathroom. With the ever dwindling supply of water, manufacturers have been pushed to create toilets that require as little water as possible in order to properly dispose of waste material.

Some newer model toilets use as little as 0.8 of a gallon of water to perform a flush. But be careful, some toilet manufacturers sacrifice flushing capability (the toilet will clog) to lower the amount of water used to perform the flush.

Other manufactures have created a dual flush mechanism allowing for the individual to chose how much water to use when performing the flush. 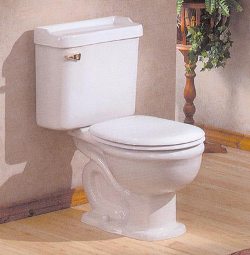 Most toilets are interchangeable with one another, and can be easily replaced as a DIY project or as part of a bathroom remodeling project or as an independent home improvement project.

Toilets are not all the same and their ability to flush with lower quantities of water has required extensive engineering. Toilets are basically made up of two pieces, the bowl and the tank, as shown in Figure 1. Water is held in the tank and then released into the bowl. Even one piece units operate in this manner, the only difference being, the tank and bowl have been manufactured using a common one piece mold.

Toilets also come in a range of seat heights and there are two basic bowl configurations, standard and elongated.

Besides the aesthetics of the toilet, if you are concerned about flushing capability you must consider:

Toilets do not need to have traps installed within the drain plumbing system, because toilets have the trap molded into the bowl.

Many manufacturers have designed matching sinks or basins, including pedestal mount units and matching bathtubs.

As with most items, colors between manufacturers vary and it is important, especially if sinks or basins, toilets and tubs are in close proximity that the colors match. A white made by one manufacturer can look grey against the white of another manufacturer. If you are purchasing units from different manufacturers take a toilet tank top and place it on the sink or bathtub and look at the color variations, before you buy. 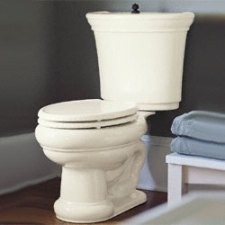 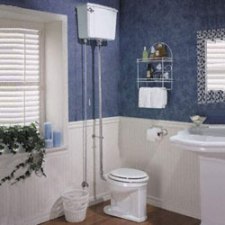 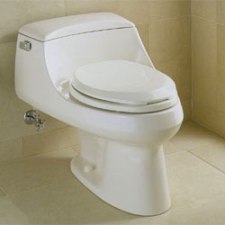 Toilet tanks will come with their own flush handles, however many bathroom design accessories companies have made flush handles that match towel bars, soap dishes and other items. Flush handles are generally easily replaceable with most toilet models.

Toilet seats now come in a variety of colors and materials, many toilets do not come with their own seats. Again, color matching is important and not all seats work properly with all toilets. 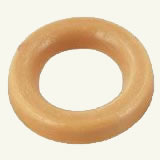 TIP: When replacing or servicing a toilet it is always prudent to replace the floor gasket seal. These seals are available in wax, as shown in Figure 6, (I recommend wax) and rubber.

It is also prudent to replace the toilet connector pipe that runs from the incoming water line to the toilet, as shown in Figure 7.

In both cases when the original seal is broken, often a new seal will not be made when you either reseat the toilet over the drain pipe or when you connect the incoming water supply fittings.

Additional information on Repairing A Toilet

Additional information on Replacing A Toilet