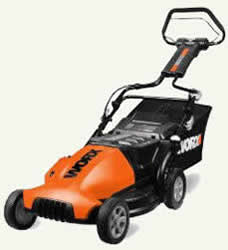 Pollution remains one of the greatest downsides to gasoline powered lawn mowers hence the preference for the battery power models. Although manufacturers have made significant efforts to rid the latter of its polluting effect, such engines are still emitting harmful aerial residue and their vulnerability increases with age. As such, battery powered mowers present a fresh, environmentally friendly alternative.

Another alternative to gasoline powered engines running lawn mowers has been that of corded electric engines. However, this option has had its fair share of problems. For starters, the cord's length could always stands out as an impediment more so where the field is extremely big yet the cord is short and inadequate.

This means that some areas are to be left unattended to. Similarly using these cords expose both the mower and other persons, pet or equipment in the vicinity at great risk should the cords get cut accidentally. The repercussions could be worse than initially thought.

Neither do they have to pollute the environment through emissions from the engine as well as regular crashes as they grow older. Furthermore, they are not only cheap to buy but also cheap to maintain.

A lawn mower using battery power costs only three or four dollars in maintenance costs for the whole year to maintain while its gasoline powered counter part will cost you a minimum of twenty dollars every year in maintenance costs alone. The cost of gasoline will drive the costs even higher as will the need for a replacement engine.

Even so battery powered lawn mowers do have their own inconveniences. Not only are they are only effective on lawns that are flat, they are also susceptible to fast run outs. The span for which the battery power will last is determined by the size of the battery although they can hardly complete lawns more than eight thousand square feet.

Weight is another impediment to successful mowing as many of these lawn mowers courtesy of the battery could be too heavy to move around since they are not self propelling.

Furthermore, they are more effective on lawns containing only certain types of grasses such as Kentucky bluegrass, perennial rye grasses and fine, tall fescues all of which are dominant during cool seasons.

Even with these disadvantages battery powered lawn mowers remain the best bet in the face of pollution posed by gasoline powered options or the danger of corded electric lawn mowers.