The great debate continues; should the base around a toilet be caulked? If you want to follow code then there is no doubt that the base of the toilet should have a ring of caulk between it and the floor, as shown in Figure 1. According to the International and Uniform codes you are to have a water-tight seal where plumbing fixtures meet floors and/or walls. 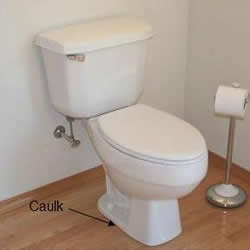 Any of the toilet installation instructions that I have seen always say to caulk between the toilet base and the floor.

Why is caulk between the toilet base and floor recommended?

It is primarily there to prevent water that is used to clean the floor from flowing under the toilet and eventually damaging the floor joists, sub-floor and if the toilet is installed in a second story bathroom it protects the ceiling below that toilet.

Although flooring may and should run under the toilet, it never seals around the toilet flange and pipe. Hence any water that may flow under the toilet base will eventually end up on the sub-floor, as shown in Figure 2. 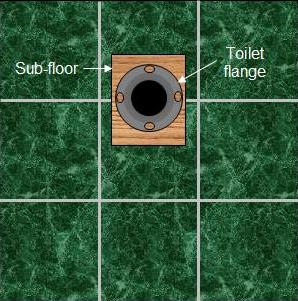 It is not only water that may be used to clean the floor that has a tendency to flow under the base of the toilet. Water from shower curtains, water splashed from bathtubs and the water that ends up on the floor as you exit the bathtub or shower can all create problems.

Yellow stains that appear on the ceilings below bathrooms may be caused by a defective toilet gasket, but it is just as possible that the yellow stain has been created by excess water on the floor above flowing down to the ceiling below.

Why is caulk not used on the installation of toilets?

The individuals who do not believe in caulking between the toilet base and the floor will tell you that it is important to have that area open so that you can detect any water leakage that may occur in the gasket between the toilet and the toilet flange. The theory is that if water starts to leak from the toilet gasket that it will be visible on the floor.

There is some truth in that. However, if you leave a one inch area at the back of the toilet without caulk you will accomplish the same function and at the same time protect your joists, lower ceilings and the sub-floor from water damage caused by the water used for cleaning the bathroom floor.

Note: Caulk should be used to seal the base of the toilet to the bathroom floor, not grout!