The installation of ceiling tiles is definitely a DIY home handyman project that will become a valuable home improvement. 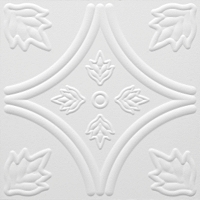 However, over the past 10 years ceiling tiles have changed in texture, many of intricate patterns, as shown in Figure 1, and coloring and are now being used as a ceiling finishing material for all the rooms in a home.

The vast majority of ceiling tiles are designed with a tongue and grove and are made of fire resistant fiberboard. They are available in 12 inch by 12 inch and 12 inch by 24 inch units.

As shown in Figures 2 through 7 ceiling tiles are now being used in almost every room in a home to add warmth, charm and character 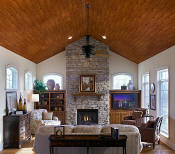 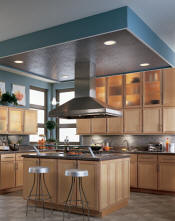 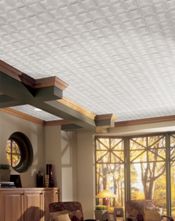 Ceiling tiles can be installed with adhesive, if the ceiling is currently made of a solid material such as drywall or they can be stapled or nailed into position on furring strips if the currently ceiling is open to the ceiling beams or if the material is not solid, such as cracked and damaged drywall.

Cut tiles should be placed at the outside edges of the room. The most pleasing aesthetic installation has the same size edge tiles at sides and ends of the room. Try to keep edge tile size to an amount greater than half a tile.

Measure the room at both ends and in the center. Use the smallest dimension, in both directions to calculate the size of the edge tiles. The dimension will most likely not be evenly divisible by 12 (the size of one tile), hence a tile will have to be cut. In order to keep the edge tiles larger than half a tile, use the inch amount and add 12 and divide by 2.

As an example if the room is 10 feet, 4 inches square; add 12 to the 4 which is 16 and divide by 2 which equals 8. Hence the edge tiles on both sides will be approximately (because the room will not be perfectly true) 8 inches.

Both the length and the width of the room must be calculated for edge tiles, as shown in Figure 8. Hence the corner tiles may require cutting in both length and width. 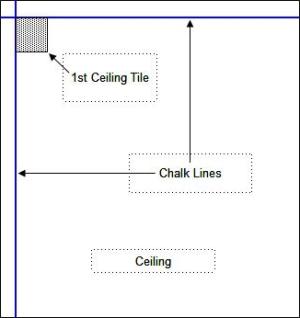 Snap a chalk line at 8 inches (use your dimensions) out from the edge of a wall along the length and width of the room and start installing the tiles, as shown in Figure 8.

Figure 9 - Correct position of ceiling tile on a furring strip

Level the furring strips using a laser level and shims. Ceiling tiles have some flex and will follow the contour of an ceiling that is not level.

Note 2: Cut the tiles, face side up using a very sharp utility knife and a metal straight edge. Power saws have a tendency to damage the face of the ceiling tile material.

Note 3: A finished cut corner tile should have the tongue and grove facing into the room to accept and lock into the next tiles.