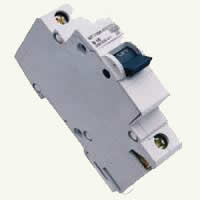 A circuit breaker will trip (turn itself OFF) for one of two reasons:

This problem is usually identified in having the breaker turn itself OFF when an electrical device is turned on. Most of the 15 amp circuits in a home carry more than one device or have the ability to carry more than one device. As an example, each electrical receptacle does not have its own circuit breaker associated with it. In newer homes, refrigerators and microwaves will have dedicated breakers, however in older homes this is definitely not the case. 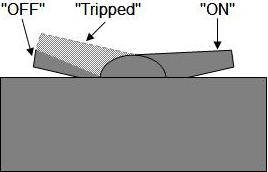 Breakers will trip if older appliances become defective in a manner that causes a higher current to flow. However, problems of overload can be caused by the simple act of replacing a group of 40 watt bulbs with 60 watt bulbs.

Determining The Location Of The Overload Or Short Circuit:

Note: One of the most common circumstances that cause breakers to trip are nails or screws that have shorted out wires inside a wall. This can happen when hanging items on a wall, such as kitchen cabinets or other items that require long fasteners. If your problem with a tripping circuit breaker started after doing some renovations, having a fastener that is shorting a wire could easily be the problem.

Note: If any of the appliances have electrical heating coils, such as a toaster, coffee pot or griddle, wait 30 seconds before turning the appliance OFF.