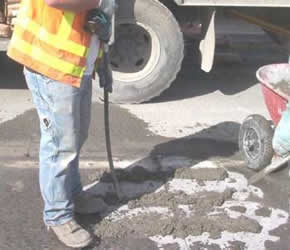 Concrete, when placed in a form will not flow into a homogeneous solution and fill all voids and hollows. Left alone, it will leave large air gaps, especially around wire mesh and rebar. Wet concrete may have as much as 20% of it's volume made up of trapped air. This trapped air reduces the density of the concrete, which equates to lower strength and an increase in the concrete's ability to have water permeate through it.

Because of this phenomenon, it is critical that the concrete be vibrated, removing any air pockets and filling all voids.

Many individuals believe that vibrating concrete is only important on large construction projects. It is just as important when your involved in a DIY home improvement project such as building a patio or footings for a deck.

If you follow the aforementioned guidelines the concrete will be free of air pockets and still be structurally sound and not permeable.

Vibrators come in a variety of sixes and are available for purchase or from most rental businesses.