Electrical contactors, as shown in Figure 1, are switches that are turned ON and OFF with electrical power rather than with the direct push of a button or flipping a toggle switch. 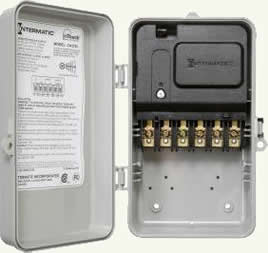 Electrical contactors are used extensively in major appliances, such as refrigerators and ranges. However, they have a multitude of applications.

In order to have an electrical driven device turn ON and OFF it is necessary to place a switch in the circuit. Figure 3 shows a basic electrical circuit with a switch controlling a load. The switch is in the open position, hence the light is not on. In this example the load is a light bulb, but could be a motor, pump, solenoid, or any other electrical powered load.

Figure 4 shows the same circuit with the switch in the closed position, hence the light is on.

There are two basic uses for contactors in a home, in some cases the contactor is installed to perform both uses: 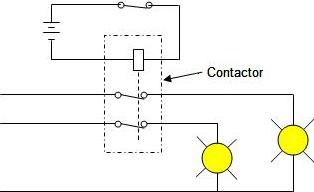 This situation generally arises in a home when low voltage circuits are used to control normal house circuits. In this day and age many items are electronic and powered by low voltage, in many cases batteries.

In a home automation situation there may be an electronic circuit that receives its commands from a wireless control or via computer software. Both of these items use very low voltages to translate push-button or switch actions to having a device switch ON and OFF.

The contactor can of course switch more than one circuit and the circuits do not have to be the same voltage. Hence, you could have a situation where by pushing a button on a wireless device you switch a 12VDC circuit on and at the same time switch a 24VAC circuit and a 120VAC circuit ON.

In summary, an electrical contactor can be an excellent tool to switch multiple circuits from a common source and is probably not utilized as much as it could be in residential applications.