The corners should not only be nailed but they should be glued. Because you are using MDF you must use an adhesive that works well with MDF material. Yellow carpenter’s glue and white glue, primarily because they are water based, do not work well with MDF as they have the potential to cause the fiberboard to swell. As well, yellow carpenter’s glue and white glue always remain slightly flexible no matter how long they have cured and this can cause the fibers in the lumber to slip.

The best adhesive to use is a product called Mitre Bond. Mitre Bond is a thin solvent based adhesive that produces an invisible joint (Figure A). 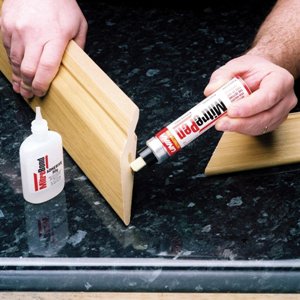 Dealing with joints in a long run.

If your room is longer than the longest piece of cornice molding that you can purchase you will have to seam the joint along its length.

The best way to make this joint as invisible as possible is to use the following techniques.

Once all of the crown molding has been nailed securely into position it is time to perform the finishing touches.

Use a spackling compound to fill in the depressions where you nailed the crown molding to the walls and the ceiling and any imperfections in inside and outside corner joints, do not use the latex caulk for this purpose.

Once the spackling compound is completely cured, use a 200 grit sandpaper to sand it flush with the surface of the crown molding.

You are now ready to paint the cornice molding.