With a deck, as in a house, the foundation, provides the structure with its overall integrity. It provides protection from settling, shifting and wind uplift. Figure 1 shows a deck sitting on 6″ x 6″ pressure treated posts. 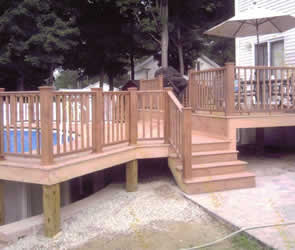 The foundation must be designed to distribute the weight of the deck and everything on the deck to the ground.

While most house foundations comprise a masonry wall around the entire perimeter of the structure, deck foundations usually consist of a series of individual concrete piers and footings. This is the same method used to build high-buildings.

There are 3 methods of deck foundation construction: 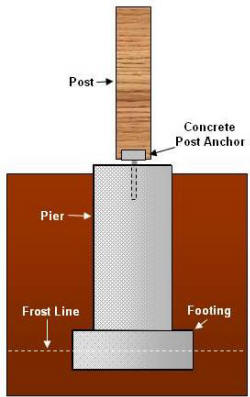 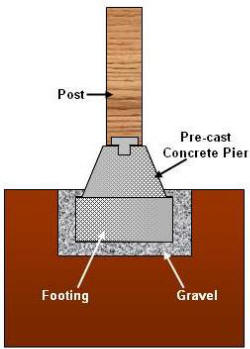 Building codes govern the minimum size, spacing and the depth of foundation supports. A typical code calls for a 16 inch square or 18 inch diameter footings that are 8 inches thick.

To calculate how much concrete you may need download our free concrete calculator.

In cold climates, codes also require that the bottom of the footing be below the frost line. If footings do not extend to this depth, ice can form beneath the footing, pushing the deck up with enough force to weaken the entire structure, a situation called frost heave.

From an engineer's perspective there are two kinds of weight, or deck load.

These load requirements apply to decks that will be used in normal conditions and are built on undisturbed soil. If you want to include any particularly heavy features on your deck, such as a spa or large planter, or if the soil is loose or composed of a lot of clay you may wish to increase the per square foot loading of the deck.

In all cases you should discuss the exact requirements for foundations in your area with your local building department.