A clogged drain line is frustrating, can be expensive to repair and can be harmful to your families health. That being said, clogged drain lines are not a fact of life! There are a number of things that can be done to avoid having clogged drains, thereby avoiding the frustration, expense and potential health issues.

The most important of these is to be cognizant of what you are throwing down the drain and to stop using your drain system as an alternative to garbage bags, even though it is more convenient! 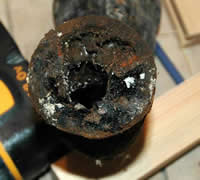 Left over grease and oil is a bi-product of many of the best cooking recipes. Many people believe that because the grease and oil is in a semi-liquid state that using the home’s drain system to dispose of it makes sense. Grease and oils coat the insides of drain pipes and they become an adhesive, similar to fly paper and they catch all sorts of small food particles as they flow down the drain. Continue to add grease and oil to the drain system and you end up with the inside of the drain pipes getting smaller and smaller, as shown in Figure 7. Eventually they will close up completely. 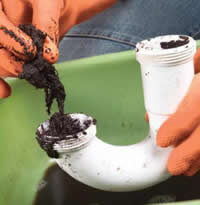 I know of individuals who cut their hair in the bathroom and flush the cut hair down the toilet. Others groom and bath the dog in the bathtub. Then they are surprised when the toilet clogs up or the bathtub takes forever to drain. Of course you don’t have to groom the dog or cut your hair in order to have hair clogging drainpipes. Hair is generally a bi-product of bathing and washing our hair. It would appear to be a very convenient solution to hair that is left in the bathtub, stall shower or sink to be rinsed away with the waste water. Hair does not like to flow freely down drain pipes. As a matter of fact, if you place a small quantity of hair in a toilet bowl and flush, it is likely that the hair will not go down on the first flush, it likes to float on the surface. Every trap from every plumbing fixture has water trapped inside it. If the hair floats on the surface of this water it is likely to stop other small particles and more hair from actually going down the drain. Where is this hair? It is clogged in the trap of that plumbing fixture as shown in Figure 8. The answer is to wipe the hair out of the bathtub, sink or stall shower before you rinse it down the drain. 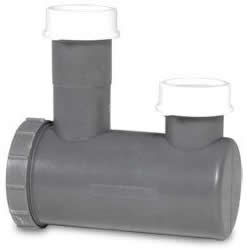 Dog hair can be a difficult problem. I have a dog, part Border Collie, part Lab and it sheds continually, we often wonder why it’s not bald. You can touch the dog without your clothes getting covered in hair. Those clothes end up in the washing machine, where the hair is eventually sent down the drain with a covering of soap. A good combination if you like clogged drains. The answer, after a lot of searching was a hair filter which can be placed in-line with the drain pipes, as shown in Figure 9. It was originally designed for beauty parlors but works well for anyone who has a problem with hair in drainpipes.

Soap scum is probably the most difficult of all the drain clogging materials to eliminate. We all have to bath and we wash dishes, clothes, floors, walls and windows. Soap scum on its own is rarely a problem it is when it is coupled with things like grease, coffee grounds, earth from potted plants, quantities of food waste and other items that are also going down the drains that the soap scum becomes a problem. The best prevention is to make sure that you flush the soap scum with clean hot water in order to wash it off the inside walls of the drainpipes. As examples; if you take a bath, after you drain the bath water, which has a quantity of soap residue left in it. Run the hot water for a couple of minutes after the tub is fully drained. If you wash your hair in the sink, run the hot water for a couple of minutes down the sink drain. In other words the best preventative measure for soap scum is to wash it away as best as possible.

There are of course other items which should never enter your home’s drain system. In most cases these items find their way into the drain pipes because they were flushed down the toilet. Children may inadvertently or out of curiosity flush something they shouldn’t down the toilet. Adults have no excuses!