Dryer vent pipes are part of the old adage - Out Of Site, Out Of Mind. But, just because you don't see the inside of your dryer vent pipe every time you dry clothes, does not mean that regular cleaning (Figure 1) is not critical. 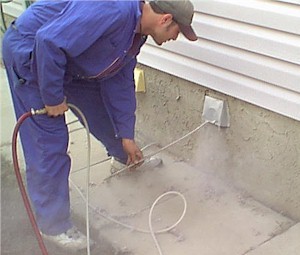 Lint traps that are built into the clothes dryers remove 75% of the lint from your clothes at the best of times. The balance of the lint is exhausted out through the dryer's vent system. Over a period of time the dryer vent pipes can easily become clogged with lint, as shown in Figure 2. 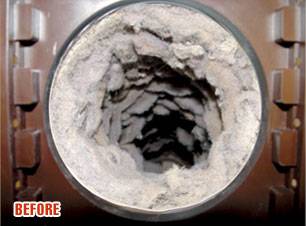 A clothes dryer, gas or electric needs to have the free flow of exhaust air in order to work efficiently. If the dryer vent is clogged with lint, it has to work that much harder in order to dry your clothes. The harder it works the more wear and tear on the dryer motor and other mechanical assemblies.

Many homeowners have replaced their clothes dryers because they believe that they are no longer working properly. Possibly because clothes need more than one drying cycle in order to become 100% dry. One of the first signs of a clogged dryer vent is that clothes require more time to dry. The dryer's vent system expels the moist air that is collected as it circulates around the clothes in the dryer. If this moist air cannot efficiently escape the dryer through the vent system, the clothes take longer to dry.

The longer it takes clothes to dry, the higher your energy costs to operate the appliance.

Dryer lint that accumulates in dryer vents is a known cause of fires. Every year, millions of dollars of damage is done to homes, hundred's of people are injured and in some cases killed as a direct result of fires in dryer vents caused by the build up of lint. It is best to use the metal ducting rather than the flexible plastic ducting, as the plastic ducting is flammable.

Once the dryer vent pipe has the lint removed, it should look new as shown in Figure 3. 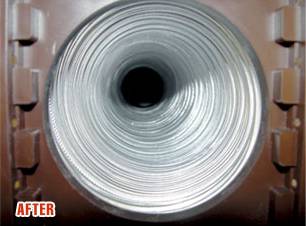 If your dryer vent piping is relatively straight, few bends, then a homeowner can conveniently clean the dryer vent pipes with an industrial vacuum cleaner and a wire brush.

In order to reach the lint, in the entire length of the vent pipe, it may be necessary to use the vacuum at the exhaust port on the outside of your home. 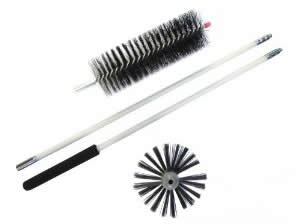 The dryer vent hood, as shown in Figure 6, which is the mechanical assembly that runs through the wall of your home connecting the dryer to the outside should be inspected at least once a year to ensure that the damper moves freely and is clogged with lint or has not been damaged due to adverse weather.

If you have a complex vent system, many bends, you may wish to consider hiring a dryer vent cleaning company. Every major city now have companies that specialize in cleaning dryer vents and have specially designed equipment to aid them in removing all of the lint in the vent pipes.