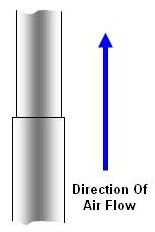 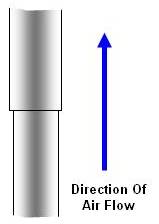 It is critical that the joint between the dryer and the first piece of vent piping is solidly attached. There are numerous alternatives that can be used to help to ensure that the pipe stays attached to the dryer.

Self tapping screws can also be used at any and all other dryer pipe vent joints to ensure that the connections do not come apart due to vibration or fatigue.

If you have excessive lint consider the installation of a secondary lint trap, as shown in Figure 14. These devices mount in the dryer vent line. They are easy to install and do not require any power. They should however, be mounted in a convenient position as the internal link screens need to be cleaned regularly.

It is important to consider the ingress of small creatures such as rodents when installing the vent hoods. Remember that screens of any size inhibit the free flow of exhaust air and as well, the smaller the screen mesh the more often the vent hood should be cleaned.

Some companies are manufacturing indoor dryer vents. Many dryer manufacturers will void the clothes dryer's warranty if the dryer is not vented to the outside.