For most DIY handymen a drywall project is relatively simple. Cut the drywall sheets to size and nail and/or screw it to wall studs or, in the case of a resurfacing project on top of older drywall or plaster. If the room or area that you are planning to drywall is relatively flat, the aforementioned techniques works fine. 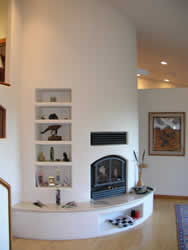 What if the surface you wish to cover is curved, as shown in Figure 1? Drywall does not bend overly well, it cracks.

Drywall comes in four thicknesses 1/4", 3/8", 1/2", and 5/8". While the most common thickness used in residential applications is 1/2", the other thicknesses have definite uses.

To cover a curved wall in drywall the wall should be constructed of plates and studs, as you would a straight wall. The wall framing can be either wood or steel.

If the curve is relatively shallow you can use 3/8" drywall and 16" centers for the stud spacing. For tight curves use 1/4" drywall and increase the studs to every 8" rather than every 16"

Installing Drywall On An Outside Curve, as shown in Figure 2:

Figure 2 - Installing drywall on an outside curve.

Installing Drywall On An Inside Curve, as shown in Figure 3:

Figure 3 - Installing drywall on an inside curve