A GFCI is a ground fault circuit interrupter. A ground fault circuit interrupter is an inexpensive electrical device that, if installed in household branch circuits, could prevent over two-thirds of the approximately 300 electrocutions still occurring each year in and around the home. Installation of the device could also prevent thousands of burn and electric shock injuries each year.

The GFCI is designed to protect people from severe or fatal electric shocks Because a GFCI detects ground faults, it can also prevent some electrical fires and reduce the severity of others by interrupting the flow of electric current. 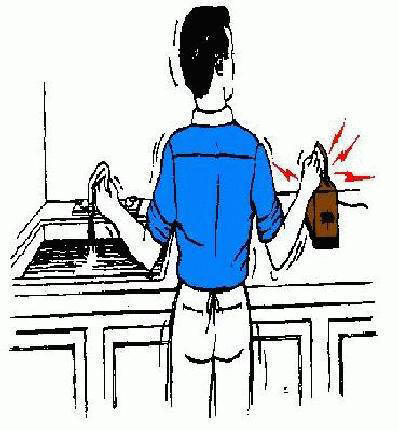 Have you ever experienced an electric shock? If you did, the shock probably happened because your hand or some other part of your body contacted a source of electrical current and your body provided a path for the electrical current to go to the ground, so that you received a shock.

An unintentional electric path between a source of current and a grounded surface is referred to as a ground-fault. Ground faults ground-fault. Ground faults occur when current is leaking somewhere, in effect, electricity is escaping to the ground. How it leaks is very important. If your body provides a path to the ground for this leakage, you could be injured, burned, severely shocked, or electrocuted.

Some examples of accidents that underscore this hazard include the following:

These two electrocutions occurred because the electrical current escaping from the appliance traveled through the victim to ground (in these cases, the grounded plumbing fixtures). Had a GFCI been installed, these deaths would probably have been prevented because a GFCI would have sensed the current flowing to ground and would have switched off the power before the electrocution occurred.

How A GFCI Works:

In the home's wiring system, the GFCI constantly monitors electricity flowing in a circuit, to sense any loss of current. If the current flowing through the circuit differs by a small amount from that returning, the GFCI quickly switches off power to that circuit. The GFCI interrupts power faster than a blink of an eye to prevent a lethal dose of electricity. You may receive a painful shock, but you should not be electrocuted or receive a serious shock injury.

Here's how it may work in your house. Suppose a bare wire inside an appliance touches the metal case. The case is then charged with electricity. If you touch the appliance with one hand while the other hand is touching a grounded metal object, like a water faucet, you will receive a shock. If the appliance is plugged into an outlet protected by a GFCI, the power will be shut off before a fatal shock would occur.

Three common types of ground fault circuit interrupters are available for home use:

This type of GFCI is used in place of the standard duplex receptacle found throughout the house. It fits into the standard electrical box and protects you against ground faults whenever an electrical product is plugged into the outlet. Most receptacle-type GFCls can be installed so that they also protect other electrical outlets further down stream in the branch circuit.

In homes equipped with circuit breakers rather than fuses, a circuit breaker GFCI may be installed in a panel box to give protection to selected circuits The circuit breaker GFCI serves a dual purpose - not only will it shut off electricity in the event of a ground-fault, but it will also trip when a short circuit or an over-load occurs. Protection covers the wiring and each outlet, lighting fixture, heater, etc served by the branch circuit protected by the GFCI in the panel box.

Where permanent GFCls are not practical, portable GFCls may be used. One type contains the GFCI circuitry in a plastic enclosure with plug blades in the back and receptacle slots in the front, as shown in Figure 4. It can be plugged into a receptacle, then, the electrical product is plugged into the GFCI. Another type of portable GFCI is an extension cord combined with a GFCI, as shown in Figure 3. It adds flexibility in using receptacles that are not protected by GFCls. 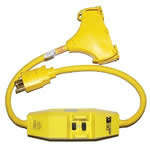 Note: Many of the portable GFCI devices also have built-in surge protection.

Where To Use GFCI's:

Owners of homes that do not have GFCls installed in all those critical areas specified in the latest version of the Code should consider having them installed. For broad protection, GFCI circuit breakers may be added in many panels of older homes to replace ordinary circuit breaker. For homes protected by fuses, you are limited to receptacle or portable-type GFCIs and these may be installed in areas of greatest exposure, such as the bathroom, kitchen, basement, garage, and outdoor circuits.

A GFCI should be used whenever operating electrically powered garden equipment (mower, hedge trimmer, edger, etc.). Consumers can obtain similar protection by using GFCIs with electric tools (drills, saws, sanders, etc.) for do-it-yourself work in and around the house.

Circuit breaker and receptacle-type GFCIs may be installed in your home by a qualified electrician. Receptacle-type GFCIs may be installed by knowledgeable consumers familiar with electrical wiring practices who also follow the instructions accompanying the device. When in doubt about the proper procedure, contact a qualified electrician. Do not attempt to install it yourself.

The portable GFCI requires no special knowledge or equipment to install.

To test the receptacle GFCI, first plug a nightlight or lamp into the outlet. The light should be on Then, press the TEST button on the GFCI. The GFCI's RESET button should pop out, and the light should go out.

If the RESET button pops out but the light does not go out, the GFCI has been improperly wired. Contact an electrician to correct the wiring errors.

If the RESET button does not pop out, the GFC1 is defective and should be replaced.

If the GFCI is functioning properly, and the lamp goes out, press the RESET button to restore power to the outlet.