A lath and plaster ceiling can be plain or ornate, with intricate carved moldings.

It is not uncommon to experience plaster falling from ceilings as shown in Figure 1. Repairing a damaged plaster ceiling, so that the repair is not noticeable requires a lot of experience and technique and may be beyond the capabilities of most diy home handymen. 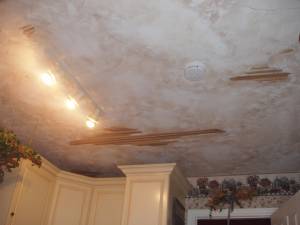 The problem is usually created over time as the lath looses moisture and shrinks. Plaster is relatively stable material that does not shrink or expand at the same level as wood does under the same temperature and humidity conditions.

Plaster is very heavy and if not held secure it will breakaway from the lath and fall to the ground.

It should be noted that the same problem can appear on walls. However, plaster will usually stay in place a lot longer on walls than on ceilings because it is not being subjected to the same forces of gravity.

If the plaster has been installed on the lath properly it will have formed a dome on the back side of the lath, see Figure 2. It is the dome, plus the rough texture of the lath that provides the support to hold the plaster in place.

As time moves on the wood lath will shrink and expand due to changes in humidity and temperature. As this occurs the plaster breaks its grip on the face of the lath as well as loosing the connection of the dome as shown in Figure 3.

Once it has lost its grip its own weight will eventually cause it to breakaway and fall.

If you have an older home, with lath and plaster ceilings you may want to inspect your ceilings and determine if the plaster has lost its grip on the lath. To accomplish this, place the palm of your hand on the plaster and gently push up. If there is movement, then the plaster is floating free. It will only be a matter of time before the plaster falls to the floor.

There is no simple fix or repair for a plaster ceiling that has broken away from its lath.