Having fire extinguishers, as shown in Figure 1, in your home can easily be a life or death decision. The problem that many homeowners face is that the fire extinguisher industry has many classifications for fire extinguishers as there are many different types of fires. It is important for you to understand the differences before you make your purchase. 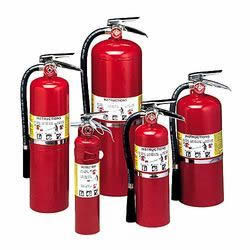 Fire experts and fire departments generally recommend that at a minimum homeowners should have appropriate fire extinguishers in the kitchen, which is the number one location where fire starts in a home, workshop, utility and furnace room and the garage.

There are five different types of fire classifications and each is designated by a letter and a geometric symbol.

Many fire extinguishers will have multiple ratings. As an example you may find a fire extinguisher marked as ABC, this means that it can effectively extinguish fires of materials in any of the A, B and C categories.

Extinguishers filled with water come in two styles, those that have to be hand pumped, as shown in Figure 2, with air in order to force the water out of the canister in a similar manner to a weed sprayer and those that are pre-charged with pressurized air called APW (air-pressurized water) fire extinguishers.

Water should only be used on Class A fires; paper, cardboard, most plastics, wood and cloth. Using water to extinguish an electrical or combustible metals as the water sprayed on the fire will spread the fire.

There are two types of dry chemical fire extinguishers

The primary problem with this type of fire extinguishers is that they leave a corrosive residue which can do more damage than the fire. This residue must be cleaned up immediately after the fire to prevent additional damage.

CO2 fire extinguishers are primarily for Class B and C fires. Carbon dioxide is a non-flammable gas that replaces the oxygen in the fire.

CO2 fire extinguishers do not leave any residue on the item, however it is more likely to have a fire re-ignite after the use of the CO2 because there is no fire retardant chemicals left behind.