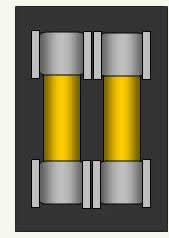 Remember that circuits in the fuse panel that fed 240 VAC to hot water tanks, ranges and clothes dryers were most likely made up of 2 cartridge fuses, as shown in Figure 1, on a removable fuse block. These will need to be replaced with double pole circuit breakers for the proper amperage.

Single pole breaker is used for circuits that require 115VAC

Double pole breaker is used for circuits requiring 230 VAC or for spit receptacles (common in kitchens) where each of the sockets on a duplex receptacle are separately fused.

You can purchase your new breaker electrical panel also called a load center with and without a main breaker. This combines the older method of having a separate disconnect from the fuse panel. The main breaker turns off the power to all branch circuits. If you have a separate main disconnect switch, there is no need to have a main breaker.

You will be turning all of the power off in the home to do the conversion from the fuse panel to the circuit breaker panel. Because you will not have any utility lighting, make sure that you have flashlights or lanterns to provide you with working light.

The cables entering the fuse distribution box, should be coming in through box connectors. It is best to identify each of the cables and where it goes before you remove them. Use a piece of masking tape wrapped around the cable. Remove all the wires from terminals and pull the wires out through the box connectors (see Figure 2b).

The box connectors that you removed from the fuse panel can be reused on the new breaker panel.