Christmas season is upon us and as we commence to decorate the inside of our homes with lights it is important to remember that overloading electrical circuits is a common occurrence at this time of year. 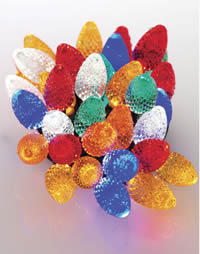 Older style Christmas lights can require as much as 7 watts per bulb.

If you use a lot of Christmas lights it is wise to consider using the newer style LED bulbs, as shown in Figure 1. Besides that they are safer, the cost to power them is greatly reduced.

Besides the bulbs themselves, another common mistake is to use a multitude of cube taps, as shown in Figure 2, in order to power the lights. Electrical receptacles are designed to handle 2 male plugs. Cube taps which allow 3 or more cords to be connected to each of the two electrical sockets of a outlet (receptacle) can create a hot spot.

The picture on the upper right is an electrical connection that is definitely not recommended. If you must use cube taps make sure that they are approved to for the current and voltage levels that you are using.

Extension cord placement is also important. Try not to run extension cords across areas where adults and children will walk. Running cords, even though the distance may be longer, around the perimeter of the room is a much safer method.

Do not leave lights or other ornaments powered on, if you are leaving the house unattended. Your neighbors will love to see your Christmas tree all lit up through the window. They will also stand and watch as the firemen attempt to put out the fire in your home.