Over the years kitchen designers have developed what they consider to be the optimum work center for a kitchen and transformed that into numerous layouts depending on the overall size and shape of the kitchen area.

Within the previous design considerations were three main points, that involved the location of three primary items within the kitchen:

While these three items are important, it is our belief that to have a properly designed kitchen there are two additional items that must be entered into the equation.

There are very few kitchens that do not have a microwave oven. Where fifteen years ago a microwave item might have been considered a luxury, more and more individuals consider a microwave oven to be a primary cooking appliance within there kitchen.

It is our opinion that for ease of cooking and reducing the distance travelled within the kitchen space during the preparation of a meal that the workspace location is more important than the location of the refrigerator.

We have prepared five basic kitchen layouts that include the aforementioned key aspects of a kitchen design. It should be noted that the requirements for a kitchen layout are relative to the type of cooking done. As an example, an individual that does a lot of baking may require a large area for making and preparing dough.

According to the kitchen design layout experts, a single line kitchen layout, as shown in Figure 1, requires the most travel distance when cooking. However, this assumes that an individual will only remove one item at a time from the refrigerator. A well organized cook, will remove all needed ingredients from the refrigerator before they start the cooking process.

Most kitchen designs have to be based on the size and shape of the room. Wanting to have a U shaped kitchen layout in a kitchen that is only eight feet in width will not work. The location of doors and windows will have an impact on the overall kitchen layout. Other items that have to be taken into account include exhaust venting over the cooktop area, drains and water pipes.

There are 5 basic kitchen design layouts: 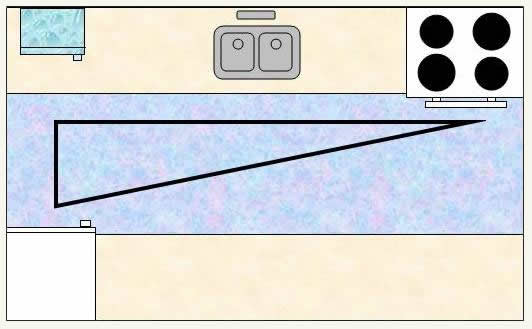 The triangle indicates the work flow involving the refrigerator, range and sink.

We have added the microwave into the layout as well as considering workspace. 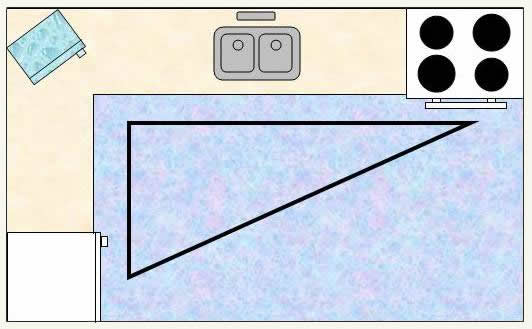 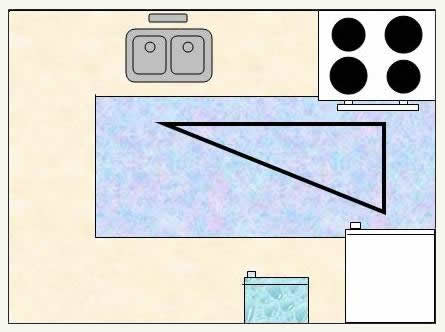 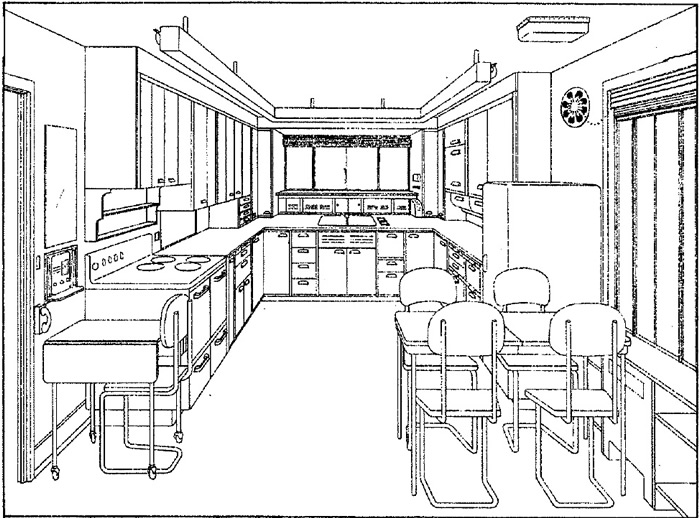 Figure 4a - "U" Shaped Kitchen Perspective 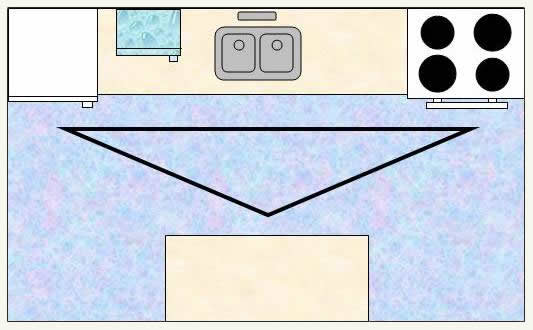 The most efficient method available today, to design a new kitchen layout is to work with one of the many 3D remodel software design packages that are available.

These design packages allow you to see your new kitchen design prior to making an investment. You can change cabinet styles, layout, appliances, flooring and lighting with the click of the mouse!