A ductless range hood is just what the name implies, there is no ducting to the outside of the home. Air that is drawn into the range hood is cleaned, most commonly by charcoal filters.

For many homeowners the inconvenience of having to clean and replace charcoal filters is not as onerous as having to figure out a method of running duct to the outside of the home.

In other cases, the expense of running duct work is outside of the budget.

From an aesthetic standpoint, it is almost impossible to tell whether any specific range hood is being vented to the outside or is ductless, by its external appearance. Many manufacturer's offer the externally identical range hood in both duct and ductless versions, in many cases an individual unit is convertible from one to the other. 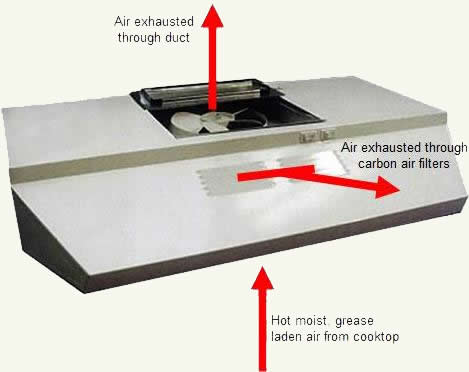 The best units use a charcoal filter, the economy models use a piece of foam. Foam filters will not remove odors. In either case the filters must be changed on a regular basis. Besides that they will hold odors and eventually disseminate them back into the kitchen, if not replaced, they are also capturing grease that can and will become a fire hazard.

Range hoods that are convertible will generally require the addition of carbon filters and some metalwork. Many manufacturer's sell a conversion kit that converts from a ducted range hood to a range hood that is ductless, as shown in Figure 2.

Ductless range hoods are available for all of the common range hood configurations; under cabinet, wall and island styles.