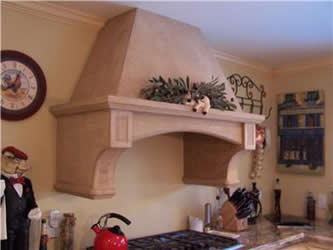 A larger hood does have the advantage of capturing the specific odors and humidity that are being created by using the cooking surface, because the hot air that is rising from the cooking surface is trapped in the body of the hood to ensure that it is exhausted.

Kitchen layout specialists and cabinetmakers staff the vast majority of kitchen design companies, very few, if any, have a mechanical engineer on staff, that has the training and experience in calculating ventilation systems and the requirements necessary to install a kitchen exhaust system, so that it is safe and does the job it was designed to do.

"Safe", you may say to yourself? How can a kitchen exhaust fan system not be safe? The basic problem that is not considered, when exhaust systems specified and installed is that what goes out must come in! In commercial kitchens, the Uniform Mechanical Code has a detailed specification for makeup air, however there is no specification for residential makeup air.

Makeup air is the air that replaces the air that has been exhausted. Today’s construction methods are making homes tighter in order to afford energy reduction. They are built specifically to keep outside air from entering the home and the tighter the home the worse the makeup air problem.

Many upscale homes now have self adjusting makeup air control devices to allow makeup air to enter the home as shown in Figure 2.

If you install an exhaust fan that moves 600 CFM (cubic feet per minute) of air from your home, you have to replace that air. In theory, if the fan was powerful enough, which it isn’t, it would suck the air out of the home and the walls and ceiling would collapse in on themselves.

Although the walls and ceiling will not collapse in your home, things that are as bad or maybe even worse may happen. In order for your home to replace the air that has been exhausted, it will look for any opening to the outside. Items that are vented to the outside of your home include gas water heaters, clothes dryers and furnaces, oil fired furnaces and wood or gas fireplaces.

An exhaust fan that is fighting for makeup air can and will create a backdraft, in other words instead of the air moving upwards from your fireplace and out the chimney it will actual cause the air to flow down the chimney and through the fireplace hearth and into the home, as shown in Figure 3. The same situation applies to heating appliances such as water heaters and furnaces. Instead of exhaust gases going up their chimney, fresh air will be sucked down the pipes and into the home. 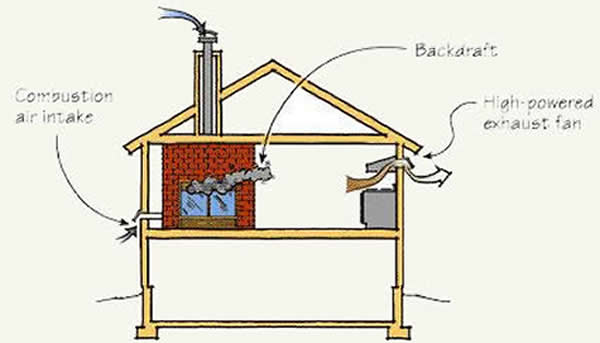 This can be extremely dangerous as those items are exhausting hazardous gases including carbon monoxide.

Do not confuse makeup air with combustion air. Combustion air is needed to provide oxygen to appliances, such as gas water heaters and stoves that use a flame to operate.

Installing an exhaust fan without makeup air is not only dangerous but can create some very uncomfortable moments. You have a houseful of guests and in the great room; there is a beautiful fire in the fireplace. You turn the kitchen exhaust fan on to remove the cooking odors created from warming the hors d'oeuvres and before you can get back to your guests in the great room it is inundated with smoke and cold air. Your guests will remember your party for years to come.

Secondarily, the less makeup air available, the harder the fan must work. A fan that is rated at 600 CFM expects to have that amount of air available to exhaust. If it doesn’t it will work harder to obtain it, motors will overheat and you will not get enough air exhausted to eliminate the odors, humidity and other contaminants that you wanted expelled in the first place.