Chlorosis means "becoming green." The term was first applied to a human condition in which the skin took on a greenish hue. Today it is more frequently used to describe plants whose normal color is green, but which have a condition which results in a lack of green color in some leaves, as shown in Figure 1. 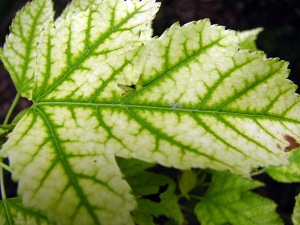 The most frequent cause of chlorosis linked to nutrient deficiency is iron chlorosis. This develops when a plant is unable to absorb enough iron from the soil. Sometimes the soil does not contain enough iron; but most often iron is in the soil but in a chemical form which makes it unavailable to the plant. Soils with high pH (alkaline) often bind iron in a form plants cannot use.

Most plants do not develop iron chlorosis in neutral (pH 7) or slightly acid soil, but begin to develop yellowing as soils become more and more alkaline (pH>7). Such plants include rose, iris, firethorn, spirea, apple and peach.

Some plants require very acid soil and develop iron chlorosis when they are grown in soils which are not acid enough. Such plants include azaleas, rhododendron, holly, hydrangea, blueberry and pin oak.

Iron chlorosis is different from other types of chlorosis; it affects young, new leaves first. Other forms of chlorosis often affect older foliage initially. Leaf color of plants with chlorosis ranges from yellow-green to almost white. Leaves showing iron chlorosis often retain green veins. In severe cases, leaf margins may be brown and die, and eventually entire plants may be killed. Even in mild cases where yellowing is slight, growth is reduced.

Iron chlorosis is usually associated with deficiency or unavailability of iron in the soil but it may also appear when roots are damaged by overwatering, poor drainage, or over fertilization. Any condition that kills roots or does not allow feeder root development can lead to iron chlorosis.

Treat iron chlorosis by eliminating the cause. A soil test will determine soil pH. Alkaline soil, or soil which is not acid enough, may be treated with sulfur or iron sulfate to make it more acidic. Poorly drained soils should be improved and plants subject to iron chlorosis should be watered carefully.

The color of plants, several months after soil is amended, will indicate whether or not there is a need for future treatment.

To achieve temporary improvement in leaf color, there are materials available for providing iron quickly to plants. Iron chelates are organic compounds containing readily-absorbed iron. They can be placed in the soil for absorption by the roots or sprayed in dilute form directly on the leaves. Since the chemical concentration of the compound may vary with manufacturer, carefully follow directions given on the package.

When fertilizer is sprayed onto leaves the process is called foliar fertilization. It is a good way to supply some nutrients, including iron, to plants rapidly, but foliar feeding is not a substitute for good soil conditions. Foliar fertilizer can supplement soil nutrition at a critical time, but to eliminate iron chlorosis, correct the conditions causing it.