Slow-release fertilizers are excellent alternatives to soluble fertilizers. Because nutrients are released at a slower rate throughout the season, plants are able to take up most of the nutrients without waste by leaching. 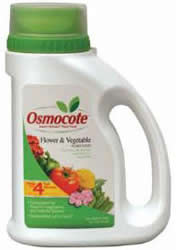 Slow-release fertilizers are generally categorized into one of several groups based on the process by which the nutrients are released. Application rates vary with the different types and brands, with recommendations listed on the fertilizer label.

One type of slow-release fertilizer consists of relatively insoluble nutrients in pelletized form. As the pellet size is increased, the time it takes for the fertilizer to breakdown by microbial action is also increased. An example of this type is MagAmp, a 7-40-0 fertilizer that is available in a coarse grade lasting two years and a medium grade lasting one year. MagAmp is used commercially for container plants, but is appropriate for use on turf, tree seedlings, ornamentals, vegetables, and flower borders.

A fertilizer may be chemically altered to render a portion of it water insoluble. For instance, urea is chemically modified to make Ureaform (ureaformaldehyde) - a fertilizer that is 38 percent nitrogen, 70 percent of which is water-insoluble. This percentage is often listed on fertilizer labels as the Percent W.I.N., or the percent of water-insoluble nitrogen. This form of nitrogen is released gradually by microbial activity in the soil. Because microbial activity is greatly affected by soil temperature, pH, aeration, and texture, these variables can affect the release of nitrogen from Ureaform. For example, there will be less fertilizer breakdown in acid soils with poor aeration -- an environment unfavorable to soil microorganisms. Ureaform is used for turfgrass; landscaping; ornamental, horticulture, and greenhouse crops.

IBDU (isobutylidene diurea) is similar to Ureaform, but contains 32 percent nitrogen, 90 percent of which is insoluble. However, IBDU is less dependent on microbial activity than Ureaform. Nitrogen is released when soil moisture is adequate. Breakdown is increased in acid soils. IBDU is used most widely as a lawn fertilizer.

Water-soluble fertilizers may be coated or encapsulated in membranes to slow the release of nutrients. For example, Osmocote, a controlled-release fertilizer is composed of a semi-permeable membrane surrounding water-soluble nitrogen and other nutrients. Water passes through the membrane, eventually causing enough internal pressure to disrupt the membrane and release the enclosed nutrients. Because the thickness of the coating varies from one pellet, or prill, to another, nutrients are released at different times from separate prills. Release rate of these fertilizers is dependent on temperature, moisture, and thickness of the coating. Osmocote is recommended for turf, floriculture, nursery stock, and high-value row crops.

Another type of coated fertilizer is sulfur-coated urea (SCU), which is manufactured by coating hot urea with molten sulfur and sealing with a polyethylene oil or a microcrystalline wax. Nitrogen is released when the sealant is broken or by diffusion through pores in the coating. Thus, the rate of release is dependent on the thickness of the coating or the sealant weight. SCU is broken down by microorganisms, and chemical and mechanical action.

The nitrogen in SCU is released more readily in warm temperatures and dry soils. SCU appears to be more effective when applied to the soil surface, rather than mixed into the soil. Any method of application that crushes the granules will increase the release rate to some extent.

SCU is best used where multiple fertilizer applications are normally necessary, such as on sandy soils or in areas of high rainfall or irrigation. SCU is used on grass forages, turf, ornamentals, and strawberries.

Though slow-release fertilizers are convenient for the gardener, there are some drawbacks associated with their use. Because the rate of release may be dependent upon soil moisture and temperature, the availability of nutrients may not be constant or predictable.

As gardeners' responsibilities continue to increase in regard to the environment and groundwater, slow-release fertilizers are a welcome alternative to the less-convenient soluble fertilizers.

Note: Trade names are provided for your information only, and usage in this article is not an endorsement of any item mentioned.