Using wood railway ties or sleepers that have been impregnated with creosote in your landscaping project, as shown in Figure 1, may give you the appearance that you are looking for, but it is important to understand the problems that you may encounter. 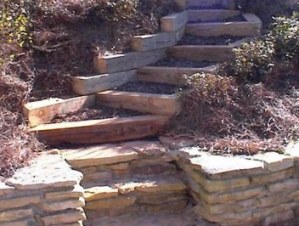 These products are created by mixing numerous chemicals that are created by the high-temperature treatment of beech and other woods, coal, or from the resin of the creosote bush.

Creosote does not dry, as with most tar like substances it remains in a semi-liquid state. Hence, if you touch a creosote impregnated railway tie, you will transfer some of the creosote to your hands and the hotter it is, the more the creosote that will liquefy.

If there are children in the area who will be in contact with the railway ties their clothes and any exposed skin areas will be covered in creosote. Because creosote is a tar product, it does not wash out of clothing easily. Coupled with the problem associated with the transfer is that creosote can and does produce a tar odor, which most individuals find quite distasteful.

Flower and vegetable gardens that are raised with the use of railway ties become perfect benches for people to sit on (Figure 2).

Creosote will also leach into garden soil and ground water. Vegetables should not be grown in areas where creosote may have or may be contaminating the soil as vegetables grown in that soil will absorb the creosote chemicals.

Homeowners use railway ties in many different types of landscaping projects as shown in Figures 3, 4, 5, 6 and 7. They not only provide a rustic appearance but are generally less expensive than alternative materials such as pressure treated lumber, granite, paving stones or concrete. 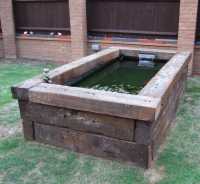 Figure 4 - Railway ties used for steps and a porch 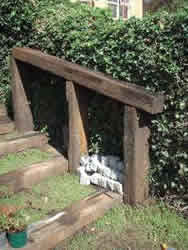 Figure 6 - Railway ties used to frame steps and a railing

As an example, plants need a variety of soils and fertilizers in order to become hardy and survive the four seasons.

Diagnosticians have determined that irritation of the respiratory tract has been caused by breathing the vapors of any of the creosotes type chemicals previously listed.

Skin damage, such as blistering and peeling, can be caused by long-term (year) exposure to creosote by contact with the skin or inhaling the vapors.

The International Agency for Research on Cancer (IARC) and the EPA have has determined that creosote is most likely a carcinogenic to humans.

You now have the information necessary to determine if wood railway ties or sleepers are the best product for your next landscaping project.