Concrete slabs have many uses. They are used to create patios, driveways, walkways, porches and are used in a host of other construction applications. 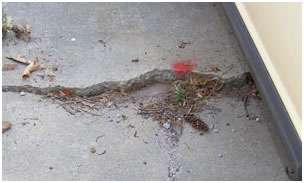 The problem with concrete slabs is that they tend to settle and crack, as shown in Figure 1. This is usually due to insufficient sub-soil preparation, but even with the best installation a concrete slab can settle due to changes in ground water levels, erosion of soils surrounding the concrete slab and soil compaction.

A cracked concrete slab is unsightly but even more importantly it can be a safety hazard as it usually lowers a portion of concrete that can be easily tripped over.

Most homeowners put up with a settling slab because the alternative of breaking it up using jack hammers, hauling away the rubble and pouring another concrete slab is not an exercise that many would look forward to.

Technology has come up with a solution to raise those settling concrete slabs without ever hearing a jack hammer. The construction technique is called "mud jacking" it is also known as concrete lifting, concrete raising and slab jacking.

How does mud jacking work?

Mud jacking is not something that can be accomplished by the home handyman. It takes a level of expertise to operate the pumping equipment and to create a slurry that will actually raise the concrete slab.

Once the slab reaches the desired level, the holes are filled with concrete and tooled flat.

Mud jacking should only be used on concrete slabs that are not bearing any load. So the process is not considered to be an adequate method of jacking a building foundation that has settled.

Mud jacking is not the answer to every settled concrete slab and it is important that you use a qualified and competent contractor who is knowledgeable and has experience with mud jacking.

Mud jacking should be considered when settling problems have occurred with: