In many cases the reason that the burners in a gas furnace will not ignite is that the flame coming out of the pilot light is not supplying enough heat to the thermocouple in order to raise its temperature to a point where it will actuate the gas control valve.

For a natural gas furnace the pilot light flame should be blue for at least 97% of its length, as shown in Figure 1. A small tinge of yellow at the tip of the flame is not abnormal.

On propane furnaces, the flame will be blue with a tinge of green throughout. A small tinge of yellow at the tip of the flame is acceptable.

There are four reasons that the thermocouple may not be getting hot enough to actuate the gas control valve.

The pilot light flame should be directed at a position approximately 1/2 inch from the tip of the thermocouple and overlap thermocouple tube slightly.

If you are experiencing a yellow flame or a split flame it is possible that the orifice in the end of the pilot tube is dirty. This is a common occurrence at winter season start-up if in fact you have turned-off the pilot light during the summer. The orifice is quite small and it only takes a very small piece of dirt to change the pilot flame characteristics.

To clean the orifice, make sure that the gas control valve is turned to the “OFF” position, as shown in Figure 2. You can use a straight or safety pin, small brad or if you have a wire brush, cut one of the steel needles from the brush. 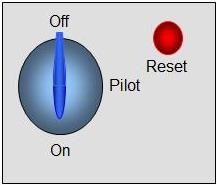 If you have a flame that dances from the end of the pilot tube assembly it is most likely caused by a draft. The draft may not be there when the cover is replaced on the burner assembly. But in order to light the pilot and make sure the furnace is functioning properly it is best to identify where the draft is coming from and stop it, at least temporarily while you are lighting the pilot light and starting up the gas furnace.