Installing your flat panel plasma or LCD television on the wall (Figure 1) is not a difficult task and should easily be accomplished by any handyman. 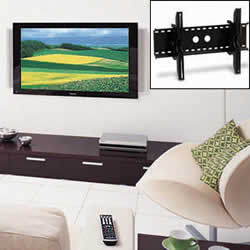 There are however, some considerations and complexities that must be considered in order to obtain a quality finished project.

The most important consideration in wall mounting a plasma or LCD flat panel television is the location. Unlike a television that sits on some sort of stand or shelf, once the flat panel TV is mounted on the wall it is not an easy task to relocate it or to even move it a few inches to the left or right or raise or lower it.

If at all possible, I highly recommend placing the flat panel TV in its proposed location, before permanently fixing it to the wall. This can usually be accomplished by stacking items on a desk, coffee table, or other piece of furniture. By doing this, you and your family can watch the television in its proposed location for a few days and make any final positioning adjustments, before drilling holes and fishing wires. 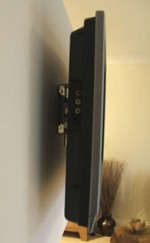 It should be noted that this type of installation requires carpentry and drywall skills and can turn into a major undertaking as a recess to house the flat panel TV must be built into the wall.

Another consideration is that the size of a flat panel TV is its panel dimension and not the outside measurements. When you have to replace your current flat panel TV it may be very difficult and/or expensive to find one that will fit the recess that you have constructed properly.

Note: A Plasma TV will generally way more than an LCD TV of the same size.

It should go without saying that the mounting bracket should be installed according to the manufacturer's instructions. Believe it or not, they really do know the best way to install their products!

Use a level, their is nothing much worse than a TV that is not level. Measuring from the ceiling or floor, rather than using a level is the perfect way to have a TV that is on a horizontal angle. Laser levels, as shown in Figure 4 are now quite inexpensive and perform extremely well.