Every handyman has changed the electrical plug or socket, as shown in Figure 1, on an electrical cord. We go to our stash of assorted plugs and sockets that we have collected over the years, grab one and install it on the end of a cord or cable. Little if any thought goes into the choice, after all, if it will mate with the outlet or receptacle that we have, then what is the difference? 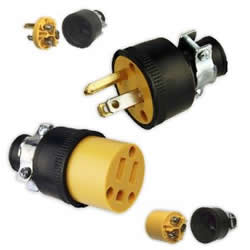 Note: In many cases the socket, is termed a female plug and the item that may be termed plug is called a male plug.

Selection of electrical plugs and sockets.

There is a big difference between electrical plugs and sockets. Each plug and socket is designed to meet a specific electrical requirement and the number and configuration of the prongs on the end of a plug or the number of slots and their configuration on the end of a socket is only a small part of the overall specifications of the plug or socket. 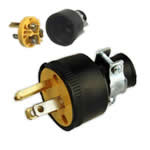 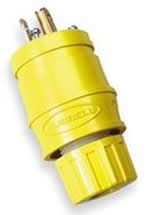 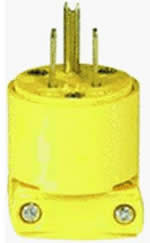 Cables that are purchased as extension cords often have the plugs and sockets molded to the cable. This makes a very strong bond, providing that the cable is not used as the method of separating the extension cord from whatever it is plugged into.

One of the biggest reasons that plugs need replacing is that people use the cord rather than the plug itself to unplug the electrical connection between outlets (receptacles) and the plug or between the plug and other sockets.

The electrical cords are not designed to be the grip to make a disconnection. When disconnecting a plug from a socket or outlet (receptacle) the plug and/or socket are the components that should be firmly gripped.