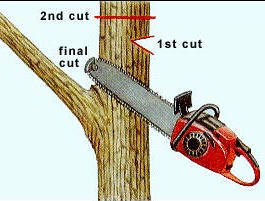 When pruning, using drop crotch cuts, it is not uncommon to have a great deal of epicormic stems on the limb that is directly below the cut. To limit the amount of epircormic growth, avoid making the cut above limbs that are less than 1/3 of the diameter of the limb that is being removed.

As the weight of this piece of tree is usually heavy the following three steps for removal should be used to ensure that little damage is done to the limb or trunk that remains.

There are times and situations for every style of pruning techniques and methods. However, there are a few practices that should be avoided unless their are no reasonable alternatives.

Topping, as shown in Figure 27, is a pruning method whereby large vertical limbs are cutoff between tree trunk nodes in order to reduce the height of the tree.

Tipping, as shown in Figure 28, is used to decrease the width of a tree's canopy by cutting horizontal limbs between limb nodes.

If it is necessary to cut the height or overall size of a tree's canopy then it is much safer, for the tree, to use crown reduction pruning methods.

Pruning methods such as topping and tipping inevitably lead to the growth of epicormic stems and in many cases the piece of limb left in place will die back to the last horizontal limb. The epicormic stems will be growing on a limb that is decaying and if the weight is enough will bring the decayed limb to the ground.

Incorrect pruning, the use of dull pruning tools and improper techniques will result in damage to the tree due to the ripping of bark, as shown in Figure 29.

Pruning flush against tree trunks and limbs can result in areas of decay, as shown in Figure 30.

Leaving tree limbs as stubs gives access to canker fungi that prevent the proper formation of woundwood, as shown in Figure 31.