As with any project it is important to use the right tool for the job and in the case of pruning trees and shrubs it is important that the tool be honed with a sharpening stone (Figure 36) to a sharp cutting edge.

The correct size and style of pruning tool to use is relative to the size and logistics of getting to the limb or branch to be pruned. In many cases in order to completely prune a tree you will need to use more than one tool.

For small, one inch or less, in diameter, stems and branches hand pruners should be sufficient and will produce a clean cut. There are two basic styles of hand pruners:

For tree branches and limbs that are between 1 inch and 3 inches in diameter, the best pruning tool to use is lopping shears, as shown in Figure 39. Lopping shears are built in the same manner as both by-pass and anvil style hand pruners, however they have larger cutters and larger handles which provide more leverage when cutting.

When branches or limbs must be cut high in the canopy of the tree pole pruners can be used. Pole pruners, as shown in Figure 40, will usually cut limbs and branches that are up to 2 inches in diameter. They are available in both by-pass and anvil style cutters, but the by-pass produces a cleaner cut. 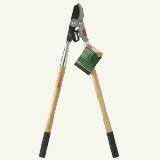 Small pruning saws with blades approximately 7 inches long, as shown in Figure 41, can be used to cut limbs and branches up to 5 inches in diameter.

For limbs and branches that are greater than 5 inches in diameter pruning should be accomplished by using a large pruning saw, as shown in Figure 42. There are numerous styles available but the important features are the length of the blade, for cutting limbs greater than 5 inches in diameter a blade that is 12 to 18 inches long should be used. Many pruning saws have extension handles, as shown in Figure 43, allowing the operator to cut tree limbs that are quite high up in the tree canopy. Care must be taken when maneuvering the saw blade at high heights as it can be very difficult to see the branch bark ridge and the branch collar to actually make a properly angled pruning cut.

It should be noted that cutting green lumber, tree limbs and branches, dulls a saw blade very quickly. In order not to damage the tree it is important that the pruning saw be sharpened often.

While larger pruning saws can be used to prune limbs and branches that are larger than 5 inches in diameter the preferred tool for large limbs and branches are gas (Figure 44) or electric chain saws, as shown in Figure 45. Using a chain saw, as a pruning tool and not damaging the tree takes some practice.

As mentioned, tools must be sharpened often to ensure clean pruning cuts. As well, the tools must be cleaned in order to avoid cross contamination between diseased plants and those that are healthy. Many forms of bacteria and organisms find freshly pruned areas to provide the perfect access to the plant.

To sanitize tools immerse them in 70% denatured alcohol or a solution made up of one part household bleach and nine parts water. Allow the tool heads, the shears or saw blades to remain in the solution for a couple of minutes. After immersion clean the tools with soap and water to remove any alcohol or bleach residue.

All trees and shrubs have saps, gums and resins flowing through live branches and limbs. Amongst other duties, these liquids flow when a branch, stem or limb is cut, the purpose to seal the cut joint, in a similar manner as blood clots when a human receives a wound, so that microorganisms cannot enter. As a general statement the free flowing of these liquids is not harmful to the tree or shrub. In some cases however, to much is released which can cause damage to the trees.

When certain tree species, such as Oak or Elm, are injured due to inclement weather, during key growing times, Oak is susceptible in Spring and Elm is susceptible throughout its growing season, it is best to apply a tree wound dressing to help the tree repair heal and repair the damage. Tree wound dressings should be applied as soon as the wound occurs. 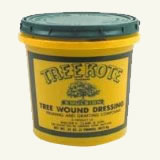 It should be noted that wound dressings do not stop decay or cure any disease, they are used as a preventive measure only.