Many homeowners face or will face the problem of damaged brick chimneys. The damage is usually caused by years of weathering. Bricks deteriorate (Figure 1) and the mortar holding the bricks together breaks (Figure 2) and powders.

The chimney must be repaired before the bricks loosen to a point where they come crashing to the ground.

If you are considering re-pointing the mortar and replacing some or all of the bricks, you may face the problem of finding bricks that match and using new bricks, although they are fine for strength, may stick out, like a sore thumb if used to fill the gaps left by the bricks that had to be removed.

If you are handy with lumber, nails, but are not overly adept with mortar, bricks and a trowel there is an alternative to the tuck and point method of brick repair on a chimney,

The method is to add a veneer or box (Figure 4) over the current brick work (Figure 3) to protect the bricks and change the aesthetics of the home. 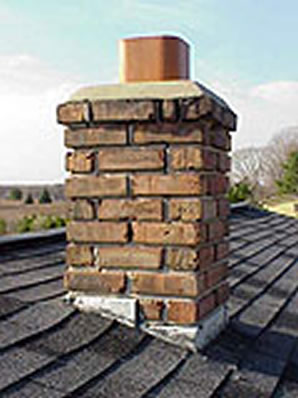 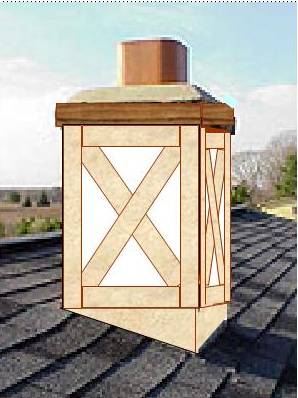 Use a weatherproof outdoor plywood, and add 1" x 3" wood strips to give it some depth. Paint with tans, browns and beiges using a high quality exterior primer (paint the inside surface) and exterior paint.

Drill some 1/2 inch holes, at the lowest point of the base, to allow any water that may find its way behind the veneer shell to drain.

It is not necessary to attach the veneer shell to the chimney, just nail or screw the four sides together.