Truss uplift is a strange almost unexplainable occurrence that happens in new homes when the bottom of the trusses separate from non supporting walls during winter months as shown in Figure 1. 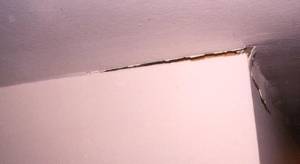 This separation breaks the taped joints between ceiling and wall drywall as shown in Figure 3. The wider the span of the truss, the more often the problem seems to present itself.

Whatever the reason, the problem is real and at the time of writing this article there are no methods available to stop the truss uplift action from occurring.

The alternative is to stop the truss uplift action from having any effect on the ceiling and wall drywall joints that exist throughout the home. Truss uplift is not a structural problem!

There are two methods that can be used to prevent the appearance of ceiling / wall cracks and separation: 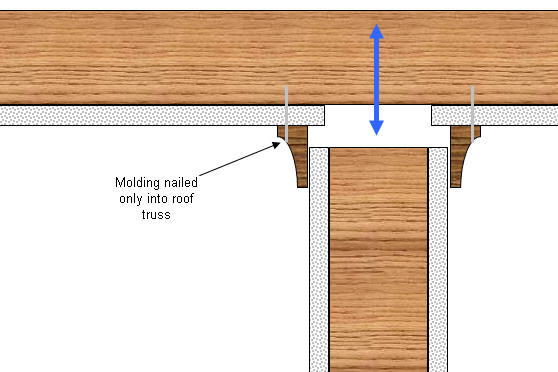 This can be a very difficult method to actually implement. The pieces of lumber used to run parallel to the truss must rest on support walls and hence must be slightly longer than the room is wide. The logistics problem created is how to get a piece of lumber into the attic, that will become the ceiling joist, that is longer than a room is wide.

If wiring, plumbing or HVAC run through the roof trusses, it can complicate the issue of positioning new ceiling joists.

Depending on how serious the roof truss uplift is, one method to consider is to open up the ceiling along the wall line and insert the new ceiling joist into position. This requires replacing a portion of the ceiling drywall and in most cases will require that insulation be moved around in the attic.