Every home handyman has faced the situation where a simple project turns into a mini nightmare because a screw or bolt has rusted and cannot be removed. Frustration, followed by numerous verbal outbursts does not usually help the screw or bolt to come out. However, with a little patience and knowledge most rusted screws and bolts can be removed!

There are two primary reasons that a screw or bolt will not turn and withdraw from its female threaded host.

If the binding problem is due to rust the first thing to try is dissolving the rust that exists between along the screw head. There are numerous commercial rust dissolving products on the market, probably the most popular being WD-40, but there are others that do a similar task. These products have very thin fluids that will generally flow through the screw threads to dissolve some of the rust and while doing so provide some lubrication. If you do not have a commercial rust removal product available you can try lemon juice, hydrogen peroxide, or a cola such as Coke or Pepsi (do not use a sugar free or sugar substitute cola).

If you are attempting to release a nut from a bolt spray the rust remove on the top and bottom of the nut.

Saturate the screw or bolt with the rust dissolving product and then gently tap on the head of the bold or screw and the assembly that is holding it in position. The tapping sets up a small vibration which aids the flow of the rust remover between the female and male threads of the bolt and the assembly.

Before using any of these liquids, think about where you are using them. If the potential of staining the device that the screw or bolt is locked into is possible, it is best not to use chemicals.

If it is a bolt that is stuck in position you can hit the head with a hammer a few times. This will cause the bolt to vibrate and may break the rust bond that is holding it in place. If you have a hammer drill with a socket adapter, you can place it over the head of the bolt or the nut and use that to try to loosen the rust. If it is a screw that won't move, place a proper size screwdriver in the head, making sure it is held parallel to the screw and tap the head of the screwdriver. The intent is to break the rust seal.

With either a bolt or screw, trying to tighten it rather than withdraw it may release the bond between the female and male threads.

Leverage can aid in breaking the rust bond. Using a longer wrench or ratchet on a socket may provide enough additional force to break the rust bond. However, be careful, to much leverage may snap the head of the bolt off rather than loosing it. To gain additional leverage with a screw, you can use a pair of vice grips on the stem of the screwdriver or as an alternative use a screwdriver bit in a ratchet. Remember to apply downward force as well as twisting force to ensure that the screwdriver tip remains seated in the head of the screw, otherwise you will damage the screw head.

A box end wrench or socket provides the most consistent force on a bolt head. The use of adjustable wrenches and/or pliers are not the best tools to release a frozen bolt.

If the material that the screw or bolt is threaded into is metal you can try to use heat or cold to break the rust bond. Heat will expand metal and hence the heat should be applied, if possible to the female portion of the assembly. Heat the assembly, use a hammer to hit the head of the bolt or screw a couple of times and then attempt the removal. Cold will cause metal to shrink and hence, should be applied to the bolt or screw if possible.

It should be noted that applying either heat or cold to the whole assembly will cause both the bolt or screw and its female mate to expand or contract and although this may not sound overly productive, they will expand or contract at a different rate than the rust that is bonding them together. Hence, heating or cooling the entire assembly may actually break the rust bond.

Warning: If you have attempted the use of rust removing products make sure that they are not flammable. Some residue from these products may remain between the threads and if heated could flame-up. 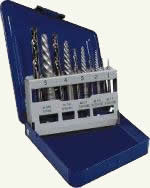 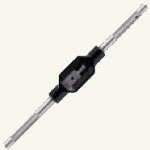 To use a screw or bolt extractor you will require a drill bit that suits the extractor size. It is important to remember that many bolts are hardened, which means you must use a quality cobalt metal drill bit and prepare yourself for a slow drilling process.

Many of the screw and bolt extractor kits come with drill bits to suit the extractor sizes.