The smell of sewer gas in a home is not an uncommon occurrence and can be caused by many factors. In many cases it can be difficult to actually determine where the odor is coming from and hence complete a repair. 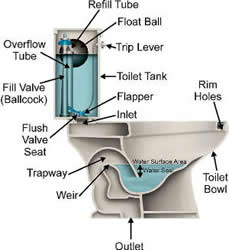 Figure 1 - Drawing of a toilet and its parts

The most common cause of sewer gas odor comes from plumbing drain traps that have dried out, as shown in Figure 2.

The drainage trap on any plumbing fixture or plumbing drain line must be filled with water in order to prevent odors from entering the home.

In many cases individuals go on vacation for extended periods and return to their homes and find that the house smells from sewer gas, this is usually caused because a plumbing fixture or trap has dried out.

Plumbing drain traps are filled every time water flows, if water does not flow, then the traps are not continually being refilled.

Dry traps, as shown in Figure 3, can also occur when there are rooms with plumbing fixtures that are not used often:

It is recommended that all toilets, in a home should be flushed every 3 weeks. The same applies to faucets that are above sinks, bathtubs and showers. This will ensure that the traps are kept filled with water.

Although dry traps are probably the cause of 75% of the sewer odors that occur in the home, there are other causes.

The wax or rubber seal that resides between the toilet drain pipe and the base of the toilet. As the trap is an integral part of the toilet, the seal is below the trap. Hence a damaged seal will allow sewage gas to escape. Always replace the toilet gasket if the toilet is removed for any reason. (See toilet repair and toilet replacement for further information).

A split, crack or bad connection in a drain pipe that is below the trap can allow sewer gas to escape.

Over the years, it is not uncommon to have leaves and other debris clog the house vent pipe that protrudes through the roof. Without adequate ventilation the sewer gas will find a method to escape inside the home.

If you live in a home that is surrounded by mature trees that drop leaves on your roof, you may wish to consider installing a vent cap (Figure 4) on all of the vents protruding through the roof, or as an alternative, adding a piece of window screening over the roof vent pipe and using a clamp to hold it in place. This will prevent debris from entering the vent stack. 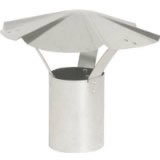 A damaged sewer pipe, on the outside of the house, can cause waste water and hence the odors associated with the waste water to enter the house through the sump pump.

Any drain line that enters the home drainage system must be vented and have a trap. It is not uncommon for a poor installer to connect the air conditioner condensate line to the drainage system without proper venting or a trap.

If during a remodel a drain was capped with tape (a common home handyman mistake) the tape will eventually dry out, allowing sewer gas to escape. Drains that are no longer in use should be capped with a proper drain cap for the material in question.

If you have exhausted the basic causes of the sewer gas odor in your house, you may have to contract with a plumber that has a smoke generator. Smoke generators are connected to the drain system, the drain system is temporarily blocked to city sewage or septic tanks and the smoke will find and escape from the problem pipe, joint or trap. The latest technology includes electronic hand held sewer gas detectors. A probe is placed near a drain or run along a pipe and it will detect sewage gas in very small quantities.