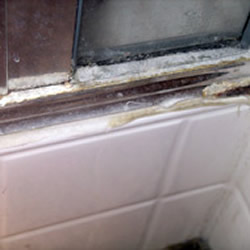 There may be no need to replace the shower door, as a shower door that leaks may be able to be repaired relatively easily and inexpensively by most home handymen.

The leaking water can be a result of direct water seeping out or from condensation. It really doesn’t matter which situation you have.

Most shower door leaks are located in one of three places:

In many cases the homeowner does not see water pouring out of the shower, but instead sees the results of water leaking out for months or even years in damage and/or mold and mildew stains on walls, baseboards and flooring.

Most leaks, which show themselves in water damage to the area just outside the shower door itself, are the direct result of an improper initial installation of the shower door.

A shower doors and its associated framework is made with drainage holes or channels that are designed to allow any water that enters the track or frame to drain to the inside of the door and eventually find its way to the shower drain.

What actually happens is the exact opposite, because the inside drainage channels or holes are blocked with the caulking the water eventually finds an exit on the outside of the shower door.

Note: It is also possible for the drainage channels and weep holes to become clogged with soap scum or other dirt and grime. If you are sure that you do not have caulking on the inside of the shower door frame and are experience leaks, inspect the drainage holes and if necessary clear them of any clogs.

Follow these instructions to repair a leaky shower door:

Note: Before starting the shower door repair it is wise to place some masking or duct tape over the drain so that pieces of caulking that have been removed do not end up clogging the shower drain.

Note: 100% silicon caulking is the best product for sealing around shower doors because it doesn’t shrink or crack and remains flexible for extended periods. Silicon is also mold and mildew resistant. Acrylic caulking on the other hand does have a tendency to shrink, crack and harden.

Note: There are known instances where the shower door frame was installed backwards, primarily because the homeowner wanted the shower door to operate in the opposite direction. This places the drainage holes or channels on the outside of the frame, rather than the inside. If you should identify this as the problem, the frame must be removed and installed correctly. Many shower doors do not have a left/right opening interchangeability and it may be necessary to replace the shower door with one that opens in the direction you desire.

Any damage done by the leaking shower door to sub-floors, molding, trim or drywall should be repaired.