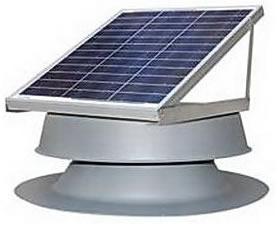 The importance of having a well ventilated attic should never be under estimated. When using your air conditioning system a ventilated attic will keep your home cooler without running your air conditioning as often. That equates to lower electrical bills! Proper attic ventilation also reduces humidity in the attic, especially in winter months, which can lead to condensation, which in turn will enhance the growth of mold and mildew and create rot.

To help homeowners who are not prepared for the expense of adding power to their attic in order to provide proper ventilation, manufacturers have created a range of solar powered attic ventilation fans.

Basically the solar vent fan is comprised of two units. 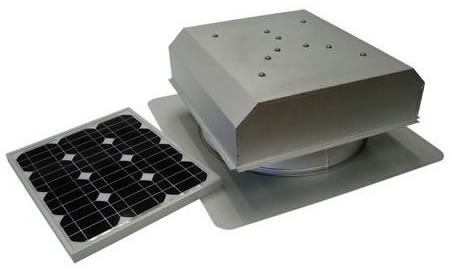 The fan and motor in its housing is mounted near the ridge of the roof in the same manner as any attic vent fan. The solar cell array is generally mounted on top of the vent fan although in many cases the solar cell array can be mounted separately from the fan in order to place it in a position that gets more direct sunlight throughout the day.

For roofs that are gable design, as shown in Figure 3, it is most common for the solar cell array to be mounted separately from the fan and motor housing.

When sunlight lands on the solar cell array it generates electricity which in turn powers the fan.

The only preventative maintenance which should be performed is to clean the solar cell unit, as dirt, grime, leaves and other debris will reduce the solar cell array’s ability to generate power.