Producing strong structure should be the emphasis when pruning young trees. As trees mature, the aim of pruning will shift to maintaining tree structure, form, health and appearance. 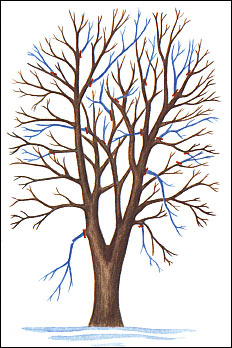 Proper pruning cuts are made at a node, the point at which one branch or twig attaches to another. In the spring of the year growth begins at buds, and twigs grow until a new node is formed. The length of a branch between nodes is called an internode.

The most common types of pruning are:

Crown thinning, primarily for hardwoods, is the selective removal of branches to increase light penetration and air movement throughout the crown of a tree. The intent is to maintain or develop a tree's structure and form. To avoid unnecessary stress and prevent excessive production of epicormic sprouts, no more than one-quarter of the living crown should be removed at a time. If it is necessary to remove more, it should be done over successive years.

Figure 2 shows the branches to be removed which are shaded in blue; pruning cuts should be made at the red lines. No more than one-fourth of the living branches should be removed at one time. 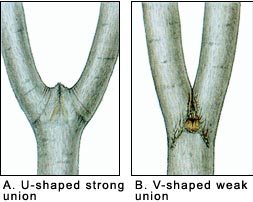 Branches with strong U-shaped angles of attachment should be retained (Fig 3A). Branches with narrow, V-shaped angles of attachment often form included bark and should be removed (Fig. 3B). Included bark forms when two branches grow at sharply acute angles to one another, producing a wedge of inward-rolled bark between them. Included bark prevents strong attachment of branches, often causing a crack at the point below where the branches meet. Codominant stems that are approximately the same size and arise from the same position often form included bark. Removing some of the lateral branches from a codominant stem can reduce its growth enough to allow the other stem to become dominant.

Lateral branches should be no more than one-half to three-quarters of the diameter of the stem at the point of attachment. Avoid producing "lion's tails," tufts of branches and foliage at the ends of branches, caused by removing all inner lateral branches and foliage. Lion's tails can result in sunscalding, abundant epicormic sprouts, and weak branch structure and breakage. Branches that rub or cross another branch should be removed.

Conifers that have branches in whorls and pyramidal crowns rarely need crown thinning except to restore a dominant leader. Occasionally, the leader of a tree may be damaged and multiple branches may become codominant. Select the strongest leader and remove competing branches to prevent the development of codominant stems.

Crown raising is the practice of removing branches from the bottom of the crown of a tree to provide clearance for pedestrians, vehicles, buildings, lines of site, or to develop a clear stem for timber production. Also, removing lower branches on white pines can prevent blister rust. For street trees the minimum clearance is often specified by municipal ordinance. After pruning, the ratio of the living crown to total tree height should be at least two-thirds (e.g., a 12 m tree should have living branches on at least the upper 8 m).

Figure 4 - Crown raising - branches to be removed are shaded in blue; pruning cuts should be made where indicated with red lines. The ratio of live crown to total tree height should be at least two-thirds. 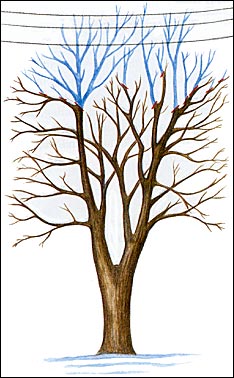 On young trees "temporary" branches may be retained along the stem to encourage taper and protect trees from vandalism and sun scald. Less vigorous shoots should be selected as temporary branches and should be about 10 to 15 cm apart along the stem. They should be pruned annually to slow their growth and should be removed eventually.

Crown reduction pruning is most often used when a tree has grown too large for its permitted space. This method, sometimes called drop crotch pruning, is preferred to topping because it results in a more natural appearance, increases the time before pruning is needed again, and minimizes stress (see drop crotch cuts in the next section).

Crown reduction pruning, a method of last resort, often results in large pruning wounds to stems that may lead to decay. This method should never be used on a tree with a pyramidal growth form. A better long term solution is to remove the tree and replace it with a tree that will not grow beyond the available space.