The water hammer or banging sound is caused by the surge of pressure in the pipe when the water is stopped or asked to change direction quickly.

Devices such as air chambers, as shown in Figure 1, air cushions, water capacitors, shock absorbers or other water hammer arrestors are now being installed in new homes to avoid the problem of water hammer. They work by providing an air cushion, built into the water system, that basically absorbs the shock wave created by the surge of pressure in the pipes when the water is turned off.

If you have not experienced water hammer in the past, but it has started, you might have a waterlogged air chamber. Most of the water hammer prevention devices can become filled with water and hence will no longer serve the purpose they were designed for.

You can attempt to clear the water hammer arrestor by performing the following tasks:

When you start using your faucets in the house you will notice that their will be air in the lines causing the water to spurt out and it will likely make some noise - do not be concerned.

If this does not solve the problem, and you are handy with piping, you can make your own style of water hammer damper or arrestor.

At the faucet or the valve where the water hammering is being generated, check the piping and determine if the valve is being fed from a 90 degree elbow or a Tee, as shown in Figure 2.

If it is fed by an 90 degree elbow you can replace it with a Tee and a capped 18 to 24 inch pipe that will create an air cushion, as shown in Figure 3. 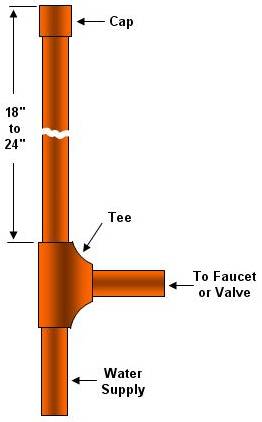 This addition to the water piping should correct the water hammering problem.

You can also purchase manufactured water hammer arrestors which conveniently mount on the water line, as shown in Figures 4 and 5. 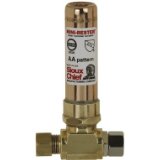