Cantilever deformation is usually caused by lumber spans that are too long at either the cantilever portion or at the tail joist portion, or both, as shown in Figure 3. 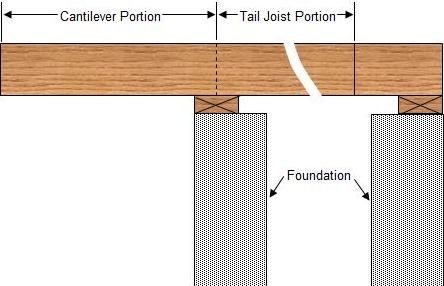 In situations where a cantilever is bearing the dead load of a roof and the live load of a floor movement and deformation may occur within the entire floor system.

The lengths of both the tail joist portion and the cantilever portion combined, will determine how much deformation will actually occur.

Building codes determine the maximum permissible cantilever span based on the size and species of lumber used for the floor joists. For construction grade spruce, one of the most common floor joist species a common building code is that floor joists that support dead roof loads and live floor loads cannot be extended beyond 16 inches for 2 x 8 joists or beyond 24 inches for 2 x 10 joists as detailed in Figures 4 and 5.

Figure 4 - Maximum length of cantilever that supports a roof load

These of course are maximum distances that maintain structural integrity. It does not mean that these distances will not have some deformation or provide some vibration.

A length of 6 times the cantilever will help to prevent any deformation or movement of the tail joists if they are subjected to a heavy live loads, as shown in Figure 6.