A note about the self adhesive vinyl cobblestones. The vinyl was very unforgiving; if you placed it down and wanted to correct its position it wouldn’t move!

I then placed a layer of simulated snow material that I purchased at the craft store over the entire platform. My original concept was to trim the snow around the cobblestone road. However, after I placed the snow into position I decided to leave it covering the cobblestone road for two reasons. I actually liked the appearance of the snow covering the simulated cobblestones and second, the simulated snow material is very difficult to cut, even with a razor blade knife and I was also concerned that the snow would not lay flat against the vinyl.

I had completed the Styrofoam raised deck and its matching back and had painted it with the stone appearance paint on the edges and back. I then covered the base of the raised deck with a piece of the simulated snow.

I placed the back rock wall and the raised deck into position on the platform. Then I put the buildings back into their positions. Things finally appeared to be coming together and the painted Styrofoam, cobblestone road and the seven buildings finally began to look like a Christmas village.

Of course, the sizes of the holes for each of the four different size trees had to be different. I picked a nominal size from one of the tree trunks for the holes for the street and house lamppost lights.

I also drilled the holes through the Styrofoam on the raised deck and as mentioned earlier realized that drilling small holes in Styrofoam is not easy. 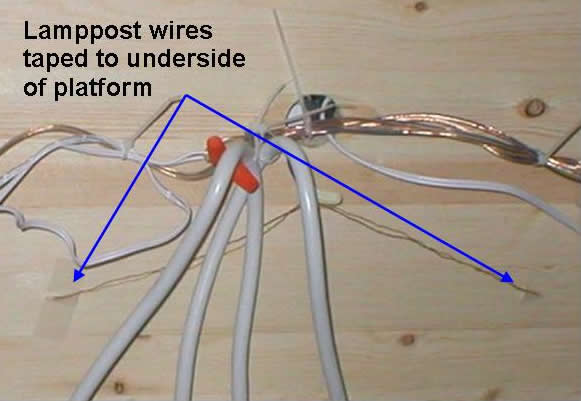