Building a home (Figure 1), adding a second story or addition to your current residence is a major home improvement. While a few individuals have the time, energy and patience to undertake the project as the GC (General Contractor), most individuals will pay the additional 10 to 20 percent fee to have a professional and licensed general contractor oversee the construction. 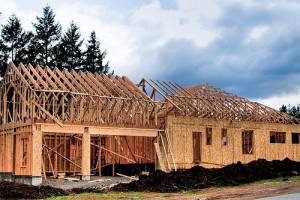 One might ask why a professional with years of experience can still have major problems on what might appear to be a relatively simple construction project.

In surveying a number of general contractors involved in residential construction (including contractors building subdivisions of thousands of homes and those that were custom home builders completing 4 or 5 homes a year, there was a general consensus on what was behind the common construction problems.

A Change Order is an instruction to the contractor to make a change to the original set of plans. It can be a simple as a change of paint color to something a lot more complex such as adding a dormer or changing the position of a wall.

Change orders that occur prior to the commencement of construction, are relatively easily implemented if you are dealing with a competent general contractor. Architectural plans must be modified, which may involve some structural re-engineering and in many cases the building plans will have to be resubmitted to the local building department for approval. Trades will have to receive copies of the new plans and possible be required to submit an updated bid.

Contractors that build sub-divisions generally keep change orders to aesthetics. Colors and styles, such as carpeting and paint. However even these contractors can get caught by allowing changes in flooring materials from carpeting to hardwood or vinyl tile to ceramic or porcelain. A hardwood floor requires a different sub-floor than does ceramics or porcelain.

The relocation of a plumbing fixture, after the construction of the bathroom can require floor joists to be cut and as the plumbers do not do floor construction, who is on site to ensure that the floor will the cuts will not squeak or sag in the future?

If you are the owner/occupant of the new home or addition, ensure that the original design is what your want and if change orders are necessary ensure that all of the construction that relates to the change order is taken care of!

Most general contractors (some general contractors will perform one of the trade functions, the most common being the foundation work) use separate companies to supply all of the necessary services that are required to construct a home. These companies are specialists in specific trades framing, brick laying, electrical, plumbing, flooring, HVAC and even landscaping.

As an example, an electrical contractor only wants to be on the site three times during the construction of the house.

Trades do not have the luxury of waiting around for another trade to finish their assignment so that they can get to work, time is money and the tradesmen are being paid whether they are working or standing around.

Drywall tradesmen will commence their assignment and if an electrical box was not installed in the ceiling for the light fixture they will drywall over the spot.

One of the primary responsibilities of the general contractor is to make sure that all the trades are brought in at the proper time and in the proper order.

Weather can destroy the timing and overall project. The general contractor wants the house sealed as quick as possible to avoid any damage caused by inclement weather and the elements, but a rain storm can saturate roof decking and if it is not allowed to dry before the roof sheathing is applied it can lead to decking that may begin to rot or develop mold in a few short months after construction.

The general contractor must balance a properly constructed home, completed on schedule with the having the trades arrive at the proper time.

Additional information on problems and their appropriate solutions encountered by general contractors and builders can be obtained by following these links: