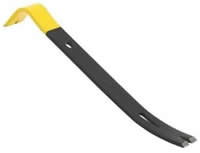 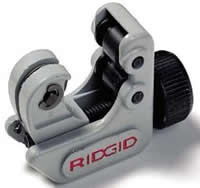 Not a problem you say! Removing copper pipe clamps can be a major chore that can try the patience of even the most experienced home handyman. Copper is very soft, and one mistake often made is to use a screwdriver under the pipe in order to raise the clamp and the nails in many cases this will damage the pipe and if nothing else will rip the clamps away from the nails holding them in place. The nails are usually spiral and do not release easily. In our example, one nail has been used to secure the ends of two pipe clamps, getting underneath that nail can be very difficult.

If the situation is as shown in Figure 3, the best approach would be to use a small 6 or 7 inch pry-bar, as shown in Figure 4, under the top clamp where the nail is and try to work the clamp and nail out. You do not need to remove the lower clamp nail as the pipe should lift up slightly to clear the clamp if the clamp is bent forward.

You must free up the copper pipe so that you can get a pipe cutter to turn 360 degrees around the pipe. Although the larger pipe cutters, as shown in Figure 5, are easier to use because of the leverage they provide in most cases getting access to tight areas is usually best accomplished using a small close quarters pipe cutter as shown in Figure 6.

Note: In the case of a pinhole leak you should always attempt to replace, at minimum, 6 inches of pipe on both sides of the pinhole.

The second logistics problem you might face is the free movement of the piece of pipe with the leak. The new section of pipe, prior to it being installed, is longer than the piece of pipe that you have removed, as shown in Figure 7. This is because the old pipe fits into the copper pipe couplings. You will require at least 1 inch of movement so that each pipe can seat inside the coupling by at least 1/2 inch.

This situation applies to the use of compression pipe fittings as well as solder fittings.

Once you have the new pipe section and the couplings in place you must be able to solder the joints together. I prefer to solder as many joints as possible prior to installing the new section into its final position. I would have pre-soldered the new pipe to the unions as shown in Figure 8.

Note: When soldering pipes it is always wise to have a fire extinguisher at hand in case you inadvertently start a fire.

It is impossible to describe a solution to every possible logistical situation that you could encounter when repairing a leak in a copper water pipe. The key to completing this type of project successfully is to think it out before you start cutting into the pipes. Understand how you will remove the damaged pipe section; insert the replacement pipe and what fittings and tools you may require to complete the project without having to run to the store in the middle.

Have all the supplies you will need with you. I would like to point out that most hardware and building supply outlets will take back unused plumbing fittings, so buying a few extra couplings, unions and a spare gas tank when starting to approach this type of project is always wise.

Note: When soldiering copper pipe that is in confined locations I find that a mico soldering torch is the best tool to use.

Standing or lying underneath a copper pipe that you are soldering is a common occurrence. Remember that flux and solder that will fall from the pipe is very hot and will burn clothing and skin. Copper pipes get extremely hot when a torch is applied – don’t reach up and grab one or try to hold the pipe with bare hands while soldering.

At a minimum wear safety goggles and gloves when soldering.

After you have completed the repair don’t forget to replace any pipe clamps that you may have removed.