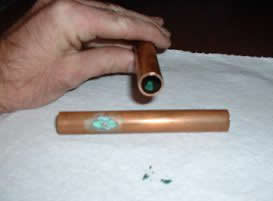 Figure 1a - Pinhole leak in a copper water pipe 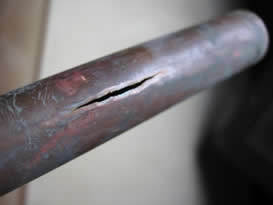 In many cases the pinhole leak in the copper pipe will create an aqua/green discoloration to the surface of the pipe at the location of the pinhole, as shown in Figure 1a.

A burst copper water pipe is usually the result of a pipe water that has frozen inside a copper pipe. When water freezes it expands, if it has no where to go it will burst or split the copper pipe as shown in Figure 2b.

Repairing a leak or a burst in copper pipe or a copper pipe joint is not a difficult job as most of the DIY home handyman sites will tell you. What most fail to tell you is that the difficulty in completing the project is usually because of the logistics – where the leaking or burst pipe is located and how it is secured in position.

I do not know of any clamps that will actually stop a leak from a pinhole or split on an elbow, other type of connector or union.

That being said, having a pipe repair clamp in your collection of miscellaneous hardware can come in real handy when you notice the water leak in the pipe at 10 o’clock on a Sunday night.

When the plumber originally installed the copper pipe in your home he made sure that it was fixed to studs or joists so that the pipes would not move and if that plumber had a sense of pride in his work, the pipes were run neatly with hot and cold water pipes running parallel to one another, as shown in Figure 3.

This would have been the correct method of installation, but this can make the logistics of repairing a portion of copper pipe all the more difficult.

While many DIY sites will tell you to just cut out the bad section of pipe and replace it with a new section, this is usually much easier said than done. For some reason, probably the law of home repair, the leak in the pipe will be in an area that is not easy to get at.

If we look at what should be an easy repair, a pinhole leak has developed in a piece of straight pipe that runs against a floor joist, as shown in Figure 3. The steps in repairing any leak are: