When discussing house designs, most of the energy design specialists will point out how they are designing homes so that they are more energy efficient by requiring less energy to keep the homes warm. However for those homeowners who live in southern climates, energy savings is relative to cooling costs, not heating costs. 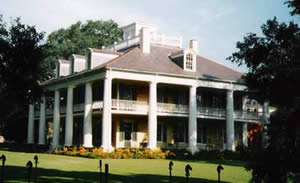 Designing homes to be cool was a common practice in the South. The hot climate plantation homes, as shown in Figure 1, are prime examples of house construction in hot climates. However, the concept of designing a house to be naturally cool was lost, probably because of the advent of central air conditioning and cheap energy. And, even though energy is no longer cheap, very few builders and architects have changed the basic southern home design.

Homes that are constructed in geographic areas where the cost of cooling is higher than the cost of heating should be designing homes that create a barrier, deflect or create shadow protection to heat on the exterior of the home.

There are three keys to designing homes for hot climates.

With a lower delta-T it is possible to reduce the R-factor of insulation in floors and walls.

Although builders do not seem to pay much if any attention to good building practices in southern climates, a lot of money has been invested, into best practice construction in southern climates, by numerous research institutes throughout the U.S. In many cases these practices would have a minimal effect on the overall construction cost of the home.

An overview and summary of some of the best hot climate building practices follow:

This provides the minimum square foot area of wall that will absorb the sun’s heat. It should also mean that the majority of window glass will face north and south rather than east and west. This will also reduce the home’s heat gain. 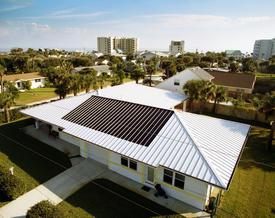 Hence, the style of roof becomes an important part of the hot climate design criteria. A hipped roof, as shown in Figure 2, will shade all sides of the home, where as a gable roof would only shade two sides.

If having a home with a large eve is not aesthetically pleasing, you can also consider shading the windows by recessing them into the walls and/or using awnings or other design features to provide shading.

Even with R-30 insulation it is wise to use roof sheathing that has an integral radiant barrier.

It should be noted that a great deal of inadvertent heat gain can come from lighting and appliances inside the home. In hot climate regions this heat gain can be quite noticeable and the homeowner should ensure that all lighting is either LED or CFL technology. All appliances should be highly efficient. On-demand or tankless hot water systems have less heat loss within the home compared to tank style water systems.

For many reasons, including keeping a southern home more comfortable, ceramic, porcelain or natural stone tile is the recommended finish flooring material.