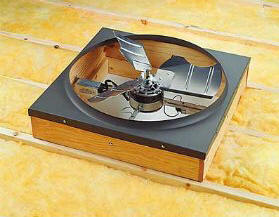 A whole house attic fans (Figure 1) can be a major location for escaping air from the living quarters to the attic. The best method to reduce and eliminate air loss through the fan in the winter is to place a cover over the fan in the attic. Use a weather stripping that will compress and follow the roughness of the attic floor, a foam weather strip works well in these circumstances. 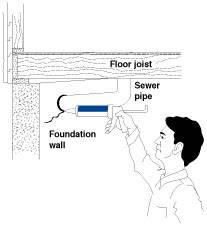 The sill plate in your home is usually made of wood, the foundation is made from concrete, stone or cinder block. The textures between the two different materials creates gaps that allow air to enter and leave your home. For voids that are less than 3/8 inch use an appropriate caulk, as shown in Figure 2. For voids larger than 3/8 inch use an expanding foam product.

Every home, with a basement, has utility services that pass through the basement walls. These services include, gas pipes, electric, water pipes, drainage pipes, air conditioning lines, television and telephone wires. Seal the voids in the basement walls with caulking or expanding foam as appropriate for the size of the void, as shown in Figure 3.

Bathtubs usually have large voids below them for drain and water pipes as shown in Figure 4. This is a common air leakage area and may require a combination of heavy duty cardboard, solid insulation, caulking and expanding foam to fill voids and gaps in the floor.

Special caution has to be taken before sealing any problems with ductwork connections. Sealing your ductwork can affect the air balance within a home causing appliances that require a natural draft to operate properly and possible emit toxic gases into the home rather than venting them to the outside. Perform the back draft test as previously described or consult a competent HVAC contractor after doing any ductwork air remediation.

Note: The common silver or grey colored product duct tape is not made for sealing HVAC ductwork. Purchase a product that is manufactured specifically to seal air gaps in ductwork.

If your crawlspace is directly vented to the outside air there is no sense in sealing any of the walls. The ceiling in the crawlspace should be sealed in the same manner as if it was a basement ceiling.