Creating a good kitchen environment does not only mean having the appliances and countertop areas in the right locations. A good kitchen environment includes proper ventilation (Figure 1), which removes odors but more importantly prevents grease particles from being distributed throughout your home. Stovetop cooking, especially frying, produces airborn grease particles that are then distributed throughout your home. 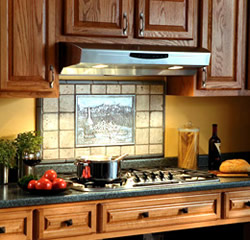 In a process known as "thermal plating", these grease particles attach themselves to walls, ceilings, furniture and every other object in your home. Once nested, they nurture the growth of molds and bacteria and can eventually turn your home into haven for all types of germs.

To prevent the grease particles from circulating throughout your home, the best defense is to provide an exhaust fan with a hood directly over the cooktop or range.

It should be noted that their are a few different technologies used in cooktop exhaust fans.

While most individuals believe that more power is better it is not necessarily the case with exhaust fans. Always remember that the more air you exhaust the more makeup air that must be supplied.

A definitive formula for calculating the size of the kitchen range or cooktop exhaust fan needed does not exist as cooking habits have to be considered when sizing a unit. Frying generates the most air suspended grease particles, the more frying, at one time, the larger the unit that is required. As an example, if you have a four burner cooktop and you are frying on all four burners simultaneously you will need a larger (in CFM's - cubic feet per minute) unit than someone who never fries on more than one burner at a time. As well, as a general statement, deep frying creates more air suspended particles than pan frying.

A secondary consideration is the height from the bottom of the hood to the top of the burners. The farther the distance, the more powerful an exhaust system that is required in order to capture all of the air that is leaving the cooking surface before it dissipates into the room air.

As a starting point for sizing, measure the width of the cooking surface as shown in Figure 2, the most common being 30 inches. 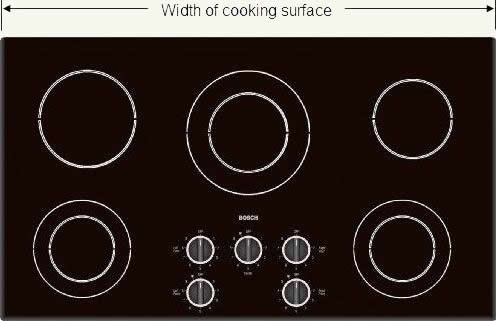 If you do a lot of frying then adjust the requirement upwards.

Of course, a kitchen cooktop or range exhaust fan will not provide any remedy to grease particles floating throughout your home unless it is turned "ON"!