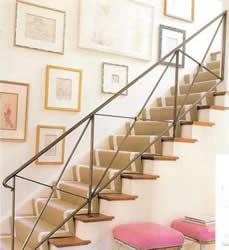 I believe that the proper hanging of pictures, above a set of stairs, is accomplished by following the angle of the staircase, as shown in Figure 2. 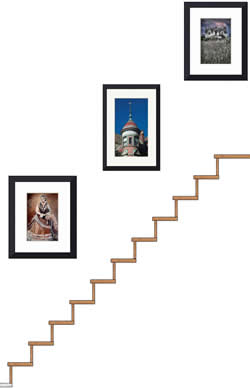 To hang pictures above a set of stairs in this manner is not difficult. It only requires some patience and accurate measuring.

For this exercise we will assume that you have adjusted all the wires on the backs of the pictures so that they are the same distance from the top of the picture frame when stretched, as shown in Figure 3.

Note: The marks shown in Figure 6 & 7 are shown in color and in a much larger size than would occur, as a visual aid. 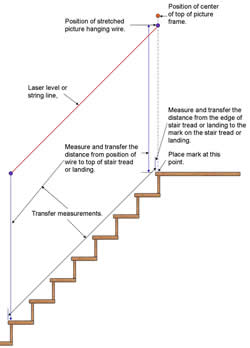 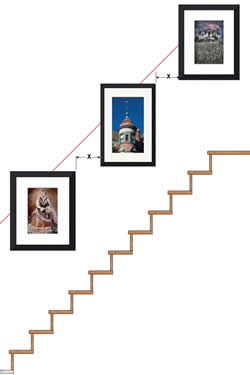 The red line shown in Figure 6 is the line that the picture fasteners will be placed on. This line runs parallel to the angle of the steps.

All pictures should be the same distance apart horizontally.

Safety Note: Pictures that are hung above a staircase can be accidentally knocked down by anyone who is ascending or descending the stairs. Just brushing a shoulder against the pictures could knock them down. In the worst case, someone could attempt to grab the edge of a picture if they have lost their balance.

To avoid having the pictures accidentally knocked off the wall I highly recommend that each picture be screwed to the wall. This is easily accomplished by drilling a small hole in the frame, through to the wall and adding a screw. Screws may need some sort of anchor to hold them in place depending on what the wall is made of.